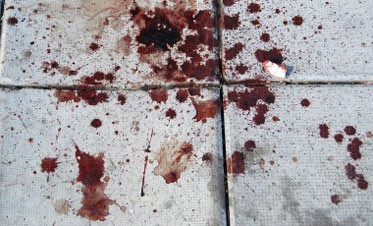 If you’re on the ground and you re not handcuffing, you’re losing, said Gary T. Klugewicz, founder of Active Countermeasures.

There is a current trend in law enforcement training that deeply concerns me. I’m sure that some will disagree, but I think this subject needs to be opened for discussion and subjected to further review.

It scares me that some departments are teaching our officers to wrestle violent and/or assaultive offenders to the ground as a primary control tool, even when they could remain on their feet. Some people perceive this as being better because you wrestle the offender down and bend him in directions he wasn’t designed to bend, rather than striking him. Teaching such tactics for that reason invokes the politically correct doctrine of minimal force rather than the doctrine of reasonable force, which was the standard set by the U.S. Supreme Court in Graham v. Connor, thus placing offender safety ahead of officer safety.

I realize that in the octagon of MMA fighting most of the matches go to the mat. I also acknowledge officers will end up on the ground more than they wish to. Been there, done that. I ve got the X-rays and scar tissue to prove it. However, to purposely take someone to the ground under circumstances that you could remain on your feet is IMHO, foolish at best.

Why? Because the sport octagon matches aren t the same as a police use-of-force altercation. The octagon matches are held in a very controlled environment, under very controlled conditions, have stringent safety rules for both competitors, and a referee to step in and stop the match to prevent serious injury. Once you remove the thrill of the competition and logically examine the strategic, environmental and fundamental differences, the disparity between the octagon and the street becomes wide and obvious. Thus, the practice of grounding someone unnecessarily doesn’t look like such a good idea anymore.

When you examine any of the martial art grappling-based fighting systems Jujitsu, Sambo, Pankration they all have the same downfall as many other martial arts that are applied to police training; none of them are easy to learn, master or retain without constant practice. If you don t train with proficiency you’re wasting your training time.

I attended a three-day ground fighting class with some 30 other line officers, which was taught by an internationally respected martial arts champion. The instructor was an incredibly skilled tactician and fighter. But two months later, I couldn’t find any attending officer that didn’t have a strong martial arts background that could demonstrate anything the instructor taught. For most attendees, the class was little more than an entertaining showcase of the instructor’s incredible martial arts talents that cost the hosting department three day’s pay for approximately 30 officers, plus the instructor s fees. Buying each officer a complete set of Bruce Lee DVDs would ve been far less expensive, also kept them entertained with exceptional martial arts skills and still had the same end result in regards to improving the officers individual skill levels.

There will always be the exceptional officer that trains regularly on his own time, and he/she will become highly skilled in the grappling arts. (If that happens to be you, this article may not apply to you quite as much as those who lack your skills.) But very few departments, if any, will provide adequate training to make the majority of rank-and-file line officers skilled grapplers. Even amateur grapplers get more training and practice in a week than most line officers get in a year.

However, for arguments sake, let’s say I’m wrong on that point. Let’s pretend you can train your officers to be competent grapplers with just a few hours training. I’m still going to say you re making a big mistake to train officers to unnecessarily take a subject to the ground. Why? The octagon matches take place on a flat, somewhat padded, well-lit, obstruction and debris-free surface. Where are officers forced to battle with violent offenders? In dark drug houses littered with used syringes on the floor; in decaying parking lots with protruding rebar, sharp concrete edges and glass bottles strewn about; and in just about every place imaginable other than a flat, somewhat padded, well-lighted and obstruction- and debris-free mat.

Let’s say you’re a competent grappler and have taken a resistive subject to the ground and established an immediate side-control position. Side control, like many other grappling techniques, gain part of their dominating power from body positions that make conventional counter striking minimally effective when fighting by the rules. But suddenly, unlike any of the little rabbit punches that your sport competitors ever inflicted, you feel an excruciating pain in your side. That could be because none of your sport competitors ever had a push dagger or other concealed weapon in the ring. Taking a possibly armed (just about everyone) subject to the ground as a primary control tool is a major leap of faith. When grappling, it’s not unusual for a subject s hands to have access to areas of his body that may conceal a weapon while completely out of your line of sight.

When encountering a spontaneous weapons attack when standing, you have a much better chance of disengaging and gaining distance while escalating to a higher force option. If you ve unnecessarily taken a subject to the ground, and he suddenly produces a knife while grabbing you around the neck with the other hand, disengaging or escalating is much more difficult, if not impossible. Make no mistake about this, it’s a very bad situation either way, but I’d much rather be on my feet if at all possible.

Another issue octagon grapplers never face is third-party interference. To go to the ground before it’s absolutely necessary is an invitation to get kicked in the head/ribs/spine (insert other target of your choice here) by the suspect s friend(s). True, this could occur anytime you are on the ground with a suspect, which only augments the argument to not spend any more time on the ground with a suspect than you must. Don’t underestimate the potential danger of a highly-trained grappler or MMA fighter.

The National Geographic Channel did a remarkable series of studies highlighting the truth about MMA striking power called Fight Science.They assembled some highly talented martial artists and engineer/researchers experienced with the use of crash test dummies to learn the truth about martial arts strikes.

The MMA fighter tested produced 500 lbs. of striking power punching to a standing crash-test dummy’s head. One of the most alarming results they documented was the extreme danger presented by finding yourself in the mounted position (i.e., you re lying on your back and your opponent is on his knees and straddling your chest, so he can punch down into your face).

When punching a mounted dummy on the ground, the results were alarming. The angle of the punch downward enhances power through a natural biomechanical advantage. Add that increased power with the fact that the head has nowhere to move to help absorb the shock of the blow, and suddenly the same MMA fighter was producing 2,000 lbs. of striking force. True, the test was with a trained MMA fighter, but I don t think it s unreasonable to expect a mounted position to quadruple the striking force of almost everyone.

With the possibility of someday being involuntarily taken to the ground by a person that has MMA training, I add this concept of unknown origin: If you find yourself in a fair fight, your tactical thinking sucks. If a competent grappler takes you to the ground, you ll have but a few seconds to react and cheat. A lot of sport MMA techniques can be quickly countered with a finger or thumb poke to the assailant s eyes. Knowing what I said about the Fight Science research, does a thumb to the eye or other sport MMA violation to escape a potential deadly force assault really sound excessive?

When it comes to ground training, use your precious and highly limited training time to train in ground fighting concepts, not sport grappling techniques. This is where you purposely train to break the sport MMA rules. There will always be those who are stronger and faster than you, but none have to be as vicious as you when forced into combat.