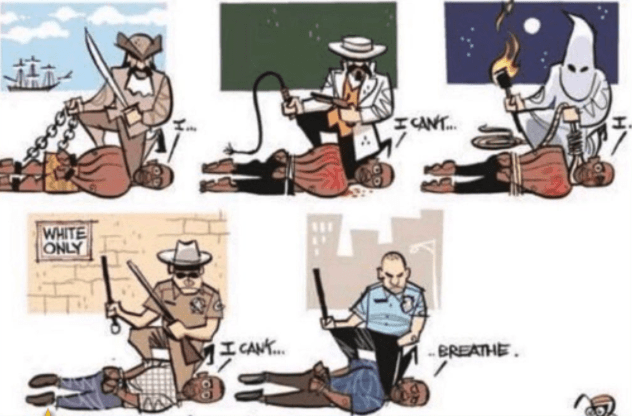 WYLIE, Texas — Texas Gov. Greg Abbott called for the firing of a middle school teacher who reportedly gave students a homework assignment that appeared to liken police officers to members of the Ku Klux Klan, according to reports and social media posts.

The Republican governor issued the rebuke through his personal Twitter account on Sunday, when he said the eighth-grade teacher from Collin County’s Wylie Independent School District “should be fired,” and asked the Texas Education Agency to conduct an investigation, KDFW reported.

“A teacher in a Texas public school comparing police officers to the KKK is beyond unacceptable,” Abbott wrote. “It’s the opposite of what must be taught.”

A teacher in a Texas public school comparing police officers to the KKK is beyond unacceptable.

It’s the opposite of what must be taught.

The teacher should be fired.

Abbott also shared a tweet by National Fraternal Order of Police Vice President Joe Gamaldi, who shared a picture of a cartoon and described it as a homework assignment “comparing police officers to slave owners and the KKK.”

“This is abhorrent and disgusting, and only further widens the gap between police officers and the youth in our community,” Gamaldi wrote last week, FOX reported.

Gamaldi also shared an Aug. 19 letter he submitted to the school district’s superintendent, in which he wrote: “[W]hat is even more disturbing is that no adult within your school thought better before sending this assignment to children.”

The assignment was administered to 400 eighth-grade students, KDFW reported.

The assignment contained a cartoon that showed five different images of men, including members of the KKK and police officers, holding their knees on a Black man’s neck as he says variations of “I can’t breathe.”

8th grade teachers in a school outside of Dallas, TX (@WylieISD) gave students a home work assignment comparing police officers to slave owners and the KKK.

This is abhorrent and disgusting, and only further widens the gap between police officers and the youth in our community. pic.twitter.com/ELfbjWQu9Z

Wylie ISD released a statement to KDFW, writing: “We are sorry for any hurt that may have been caused through a social studies lesson that included political cartoons that reflected negatively on law enforcement. Wylie ISD values our school resource officers and all members of the law enforcement community.”

IN THE NEWS AGAIN…

A school in New York is under fire after a high-school teacher handed out a Black Lives Matter protest image comparing police with slave owners and the Ku Klux Klan, according to a report.

“My daughter showed me the paper. I said, `What is this?! You’ve got to be kidding me!’ ” said Westlake High School mom Ania Paternostro. “This cartoon compares the police to the KKK. It’s an attack on the police.”

Paternostro took her protest to Mount Pleasant School District Superintendent Kurt Kotes and Westlake Principal Keith Schenker, whose school is in the district.

“This cartoon is disturbing. We have to respect the men in blue who protect us,” added the mom of two, a native of Poland.

“We don’t need a teacher brainwashing my kids. I’ll teach my kids about what’s right and what’s wrong.”

Her daughter Nicole said she was bullied for being the whistleblower on the controversial lesson plan, FOX reported.

“The cartoon was disgusting,’’ the teen said about the image she considered one-sided and anti-police. “It compared the police with all the terrible people in history. It was not fair. It wasn’t right.’’