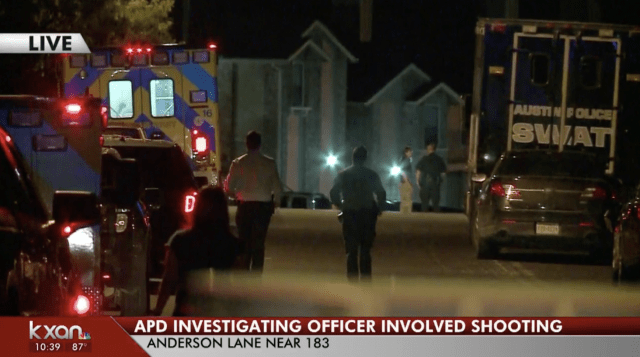 AUSTIN — A SWAT sniper killed a suspect who took multiple shots at police officers after barricading himself in an apartment in northeast Austin on Sunday night.

Austin police responded to a SWAT situation at the Salado At Walnut Creek Apartments at 2104 East Anderson Lane near the U.S. 183 service road around 7:15 p.m. A woman told 911 dispatchers that her husband had been drinking and was threatening to harm her. As a result, she locked herself in a back bedroom, KXAN reported.

Police Chief Brian Manley said in a briefing that when officers arrived five minutes later, her husband was trying to get into the room where she was. Therefore, officers forced their way into the apartment in order to rescue her.

They were able to get the woman out of the apartment and she was taken to a nearby hospital where she was treated for injuries.

Chief Manley said multiple commands were given to the 74-year-old suspect who barricaded himself inside. Nevertheless, when he repeatedly failed to comply, the SWAT team was called and officers set up a perimeter around the apartment.

While officers continued to try to get the suspect to come out, he was seen near the window armed with a handgun. About six minutes later, Manley said the suspect opened the front door and fired multiple shots at SWAT team members positioned in front of the complex.

The SWAT sniper is a 25-year veteran with the Austin Police Department and has been placed on administrative status while they conduct the investigation, which is normal protocol.

People who have videos of the incident are asked to submit them to APD.