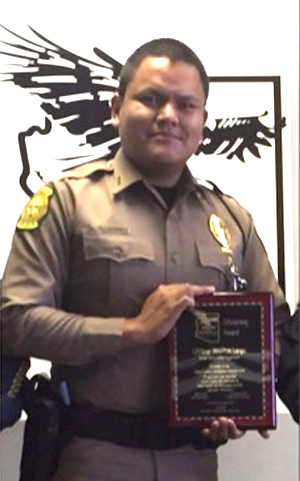 On April 20, 2017, Kirby Cleveland was arraigned at the Albuquerque, N.M., federal courthouse for charges related to the murder of Officer Houston James Largo, 27, a tribal police officer for the Navajo Nation Division of Public Safety. He pleaded not guilty and was assigned counsel. Preliminary and detention hearings are scheduled for April 21, 2017.

On March 11, 2017, Officer Largo was shot near Prewitt, N.M., while responding to a domestic violence call. He succumbed to his wounds hours later, on March 12, at the University of New Mexico Hospital in Albuquerque.

Cleveland, 32, is enrolled as a tribal member of the Navajo Nation. He is charged with eight offenses, four of which are death-eligible. The charges stem from the encounter that resulted in the fatal shooting of Officer Largo as well as from Cleveland’s alleged escape from an Albuquerque halfway house, where he was confined by order of the U.S. Bureau of Prisons:

On the night of March 11, Officer Largo was responding to a domestic violence call when he stopped a pickup truck with Cleveland and another person inside in a remote area about 40 miles outside Gallup, N.M. According to Cleveland’s wife, he had been drinking and became “drunk and angry.” Cleveland got a lift from his wife and took a rifle with him to a friend’s house. Shortly after she dropped him off, she heard several shots. Cleveland brought his rifle home and told his wife, “I shot that police officer, you need to go help him.” The evidence indicates that Cleveland got off nine shots from a distance of approximately 80 feet. One shot to Officer Largo’s mid-section was blocked by his vest, but another shot to the forehead proved fatal.

A neighbor, who saw Officer Largo’s vehicle outside, approached the car and discovered Officer Largo face-down on the ground near his police vehicle “bleeding form his mouth, ears and nose” and having difficulty breathing. Shen then called for assistance on his police radio. Deputies who responded discovered the pickup truck driver handcuffed to the steering wheel and the keys to the truck in its bed. Largo was lying about 50 yards away. His service firearm, with two rounds fired, was found near his feet. The driver of the pickup truck identified his companion as Cleveland, who had fled the scene. After dawn, tribal police located him hiding in a cave near his residence. Cleveland’s criminal record shows a history of violent crimes, including a home invasion, as well as probation violations.

Officer Largo, also a Navajo, was born to the Salt People Clan on his mother’s side and born for the Towering House Clan on his father’s side. He had served with the Gallup Police Department, where, in his rookie year, he was named Officer of the Year, and then briefly with the McKinley County Sheriff’s Office before becoming a tribal police officer with the Navajo Division of Public Safety five years ago. In 2016, Largo was an IACP Indian Country of the Year honoree. He also received the Navajo Nation Police Department Lifesaving Award for his role in a 2015 domestic violence incident in which one tribal officer was killed and two others wounded. In addition to his police service, he volunteered as a firefighter for McKinley County Fire and EMS.

Domestic violence accounts for about a third of the approximately 290,000 calls for service the Navajo Division of Public Safety (formerly the Navajo Tribal Police) fields each year. Also prevalent are problems that are usually thought of in the context of third-world countries, but which are typical of American Indian reservations. In addition to extraordinary poverty levels, residents experience extremely high levels of diabetes, glaucoma, alcoholism, drug addition, HIV/AIDS, domestic violence, infant mortality and suicide. Tribal social services attempts to deal with these issues in various ways. One poster that is displayed in many places in the Navajo community reads “Domestic violence is not traditional.”

The Navajo Nation is dry, and it is illegal to buy, sell, consume or transport alcohol on reservation land. However, alcohol is a tremendous problem, and there is no shortage of bootleggers to supply reservation customers.

The Navajo Nation’s rate of violent crime is higher than that of most American cities. According to a January 2017 report issued by the U.S. Department of Justice, “Violent crime rates in Indian country are more than 2.5 times the national rate and some reservations face more than 20 times the national rate of violence.” “Indian country” is a term embodied in the Federal code that refers to reservation land under the jurisdiction of the U.S. Government. Most – but not all – tribes and tribal land in the United States is under federal jurisdiction.

A Federally recognized tribe, the Navajo is the largest in America, with 200,000 of its 300,000 members living on the 27,000-square-mile reservation, which covers parts of Arizona, New Mexico and Utah. The Navajo Nation is about the size of West Virginia, and it is one of the poorest regions of the United States. Per capita income for Navajos is about $7,000 annually. Approximately 43 percent of the tribe lives below poverty level, and the unemployment rate hovers around 50 percent.

Tribal law enforcement is funded in part by the tribe and in part by Federal grants. The understaffed Navajo Division of Public Safety is divided into seven districts. About 210 sworn personnel work in one-officer units; each officer is responsible for patrolling roughly 70 square miles. It is not unusual for police backup to take an hour to an hour-and-a-half to arrive.

Indian tribes can pass and enforce only misdemeanor criminal laws; felonies are under the jurisdiction of the Federal government. The Navajo Nation Division of Public Safety arrested Cleveland on tribal charges on March 12, and he remained in tribal custody until March 20, when those charges were dismissed. He was then immediately arrested by the FBI on a Federal criminal complaint charging him with killing Officer Largo. Cleveland has been in federal custody since then and will remain in custody pending trial on the indictment.

The Gallup and Albuquerque offices of the FBI, and the Crownpoint, Shiprock and Chinle offices of the Navajo Nation Division of Public Safety investigated Officer Largo’s murder. The New Mexico State Police, the McKinley County Sheriff’s Office, the Albuquerque Police Department, and the Burlington Northern Santa Fe Railroad assisted in the investigation. The case is being prosecuted by Assistant U.S. Attorneys Niki Tapia-Brito and Michael Murphy.

Liz Martinez is Guachichil (Mexican Indian) and a former New York State investigator. She is a Ph.D. candidate at Arizona State University, with a research focus on coerced confessions and wrongful convictions. She is an expert witness in forensic linguistics and retail security, especially organized retail crime, as well as the author of the book The Retail Manager’s Guide to Crime and Loss Prevention (Looseleaf Law, 2004), a mystery novel, several short stories and hundreds of articles about police and security, including “Gangs in Indian Country.” She is currently at work on a biography of Iwo Jima flag-raiser Ira Hayes, a Pima Indian. She can be reached via www.LinkedIn.com/in/LizCMartinez.

Liz Martinez is a former New York State investigator. She is working on a Ph.D. in linguistics, with a research focus on coerced confessions and wrongful convictions. She is a consultant and expert witness in the areas of forensic linguistics and retail security, especially organized retail crime. She is also the author of the book The Retail Manager’s Guide to Crime and Loss Prevention (Looseleaf Law, 2004), a mystery novel, several short stories and hundreds of articles about police and security. She is currently at work on a biography of Iwo Jima flag-raiser Ira Hayes, a Pima Indian. She can be reached via www.LinkedIn.com/in/LizCMartinez.

Oklahoma officer responds to residential fire at his own home, rescues family