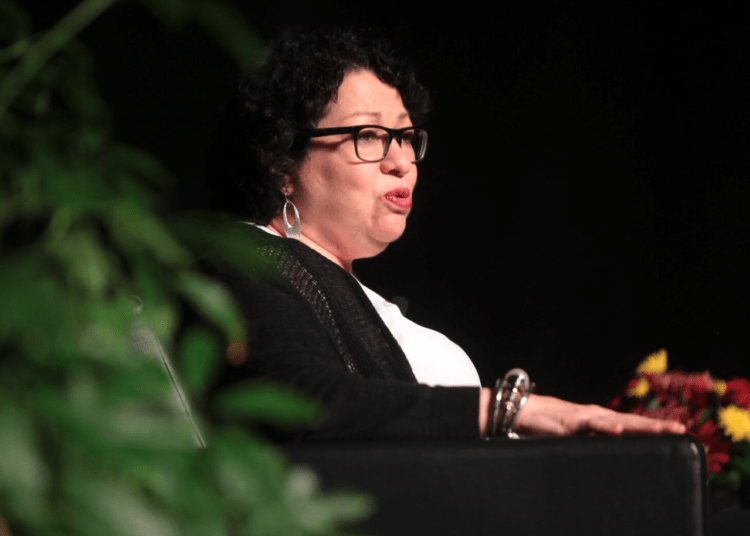 Supreme Court Justice Sonia Sotomayor has been slammed for spreading “false” COVID information, according to the Daily Wire.

Sotomayor was taken to task by PolitiFact after she claimed during oral arguments over the Biden administration’s vaccine mandate on Friday that more than 100,000 children were in “serious condition” due to COVID-19.

“We have over 100,000 children, which we’ve never had before, in serious condition, and many on ventilators” due to coronavirus, Sotomayor said.

In a sharp rebuke, PolitiFact rated the statement as “False,” writing in-part:

While the number of coronavirus-positive pediatric hospitalizations has risen with the spread of the omicron variant, Sotomayor’s number was way off.

At the time she made this comment, federal data showed that fewer than 5,000 coronavirus-positive children were in the hospital. In fact, fewer than 83,000 children have been hospitalized for COVID-19 — cumulatively — since August 2020.

There are over 100,000 cases among children, but scientists say that few of those are severe.

“Omicron is as deadly as delta and causes as much serious disease in the unvaccinated as delta did,” Sotomayor also claimed. “The numbers—look at the hospitalization rates going up. We have more infected people today than we did a year ago in January. We have hospitals that are almost at full capacity with people severely ill on ventilators. We have over 100,000 children, which we’ve never had before, in serious condition, and many on ventilators.’”

Sotomayor’s statement even conflicts with Dr. Anthony Fauci, who has been accused of perpetuating hysteria.

Based upon Sotomayor’s comments, many legal analysts have predicted that she will rule in favor of Biden’s vaccine mandate despite constitutional arguments. However, they also say it’s a moot point since the liberal justice has always been expected to side with the administration on the issue.

Meanwhile, paranoia has been created and has settled into culture like a life-sucking force. As a result, it is causing people to take illogical precautions. For instance, a Houston mother was charged this week with child endangerment as she transported her COVID positive 13-year-old son in the trunk of her car because she didn’t want to be exposed to him, Law Officer reported.

Alarmist comments like Sotomayor’s not only cast doubt on her ability to remain a fair justice in the matter before the court, but they contribute to the irrational and unhealthy behavior we are seeing across the country.