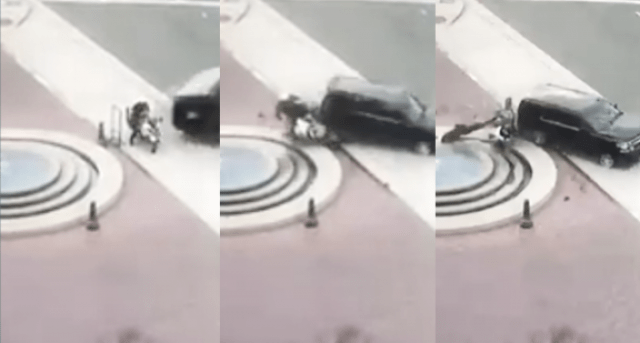 LOS ANGELES – A stunning video shows an LAPD motor officer getting struck by an SUV and thrown into a water fountain. Fortunately, the mayor of Inglewood, California and the officer are counting their blessings. Both were involved in the breathtaking collision on Tuesday that sent the mayor’s SUV hurtling into the motor officer sitting on his bike. As a result of the impact, the officer was launched into a nearby water fountain.

The accident was caught on video (shown below) by an area surveillance camera, obtained by KABC Los Angeles.

Mayor James Butts, who has served as mayor of the Los Angeles suburb since 2011, is a longtime public figure in Southern California. Moreover, he served as a police officer himself, and later police chief, in Santa Monica.

The video shows Butts’ black SUV making a left-hand turn into the entrance of the University of Southern California on Tuesday morning. During the turn, the mayor’s vehicle is hit by a silver sedan in the oncoming lane and sent spiraling into the police officer, who was stationary with his motorcycle.

The unnamed officer was wearing his helmet when he was knocked into the nearby fountain. He suffered substantial injuries, but is expected to make a full recovery, according to KABC.

The driver in the sedan was uninjured.

“I am thankful the occupants of the other vehicle were uninjured,” Butts said in a statement Wednesday. “I am thankful that the motorcycle officer is expected to make a full recovery. He has been on my mind and heart since the accident.

“I was a motorcycle officer with Inglewood Police and was hit twice by cars myself,” he added. “It is a dangerous job. I was so grateful to see that he was alert and communicative at the scene. I pray for his speedy recovery.”

The driver of the sedan had a green light, while the mayor was waiting to turn, a police source told KABC.

Butts stayed at the scene of the accident and spoke with police officers when they arrived. Thus far, no one has been cited in the crash.

Watch: LAPD officers shoot man with a lighter designed to look like gun