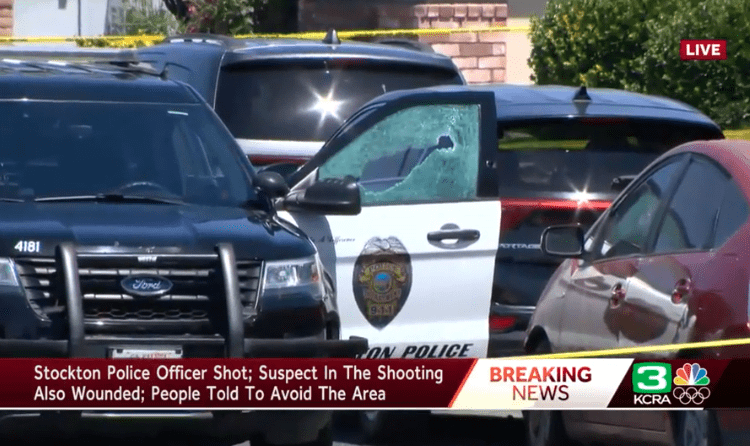 STOCKTON, Calif. — A Stockton police officer and a male suspect have died from injuries sustained in a shooting Tuesday, the Stockton Police Department said. The shooting took place near the 4400 block of La Cresta Way. Both the officer and the male suspect were taken to an area hospital after being shot, KCRA reported.

People who live in the area told the news organization they heard 10 to 15 gunshots. A patrol unit with bullet holes remained in place at the crime scene.

UPDATE: Stockton police say one officer and a male suspect have been shot. Their conditions are unknown. pic.twitter.com/dzTDdqYGh5

The daughter of a woman who saw the shooting told KCRA that she was on the phone with her mom as things unfolded. The mother said she heard a couple fighting, and the man was also seen beating a child under his arm. When police arrived, things escalated, resulting in the shooting. There were no further details provided at the time of publication.

Stockton Mayor Kevin Lincoln posted a video on Twitter about the shooting, saying that the city of Stockton suffered a loss.

“At this moment our community grieves the loss of one of our very own Stockton police officers,” he said in the video. “This is a time for us to come together, to surround and support one another and to pray for the strength, healing, comfort and peace for all that have been impacted by this great tragedy.”

Stockton Police Chief Scott Jones is expected to provide an update on the shooting during a press conference later in the day, ABC 10 reported.

Meanwhile, two Concho County (Texas) Sheriff’s deputies died in a shooting Monday night after a short car chase, Law Officer reported. After a standoff, the suspect eventually surrendered.  Moreover, a San Luis Obispo (California) police officer died in a gun battle with a suspect, who was also killed, as officers tried to serve a search warrant on Monday.

The tragic sequence of events is occurring during National Police Week, which serves as a way to remember those lost or injured in the line of duty and to recognize the sacrifices made by those who choose law enforcement as an occupation.