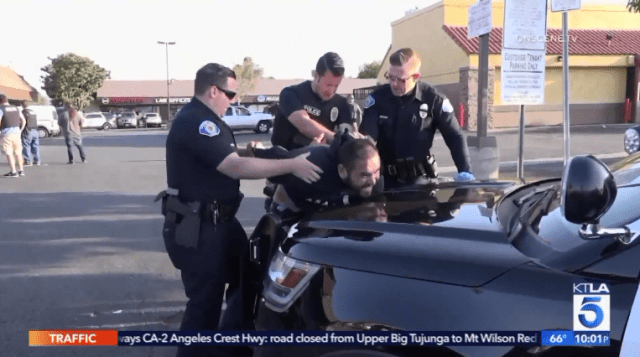 Officers take suspect into custody after four people were killed and others maimed in two Orange County cities, 2019. (Screenshot KTLA)

GARDEN GROVE, Calif. – A man killed four people and maimed two others in a stabbing spree at several locations in Orange County before being arrested Wednesday, according to information from Santa Ana and Garden Grove police.

Police said a 33-year-old Hispanic male from Garden Grove was arrested outside a 7-Eleven in Santa Ana, after a series of robberies and violent attacks that Lt. Carl Whitney with Garden Grove Police Department called “pure evil” at a news conference, KTLA reported. The suspect’s identity was not immediately released.

The stabbing spree left a trail of blood spread over eight separate crimes scenes in both Orange County cities.

The series of events began when police were called to a burglary at a Garden Grove apartment complex at 12162 Jentges Ave. shortly after 4 p.m., Whitney said. The apartment had clearly been ransacked.

Then around 4:23 p.m., police received a report of a robbery at a bakery at 13040 Chapman Ave. in Garden Grove. No one was injured in that incident. Nevertheless, investigation revealed the suspect was driving a silver Mercedes.

Officers were then called back to the same apartment at Jentges Ave. shortly after 5 p.m., where the suspect had apparently returned and stabbed two men who lived there, police said. One victim was found inside the apartment while another was outside.

One was pronounced dead at the scene. The other was taken to a hospital where he succumbed to his injuries, Whitney said.

At 5:40 p.m., police were called to robbery in progress at the Cash N More on 12845 Harbor Blvd. No one was harmed in that robbery.

However, about 25 minutes later, police were called to another robbery in progress, this time at Best One insurance agency at Harbor Boulevard and Garden Grove Boulevard.

According to a witness, a female employee was stabbed multiple times before the suspect fled the business. Police said the victim was conscious and talking, and is expected to survive.

Police were alerted to another stabbing around 6:09 p.m. at a Chevron at Harbor Boulevard and Banner Drive. At that location, a man was pumping gas when the suspect confronted him and attacked. Witnesses reported seeing the suspect attack “with multiple knives or machetes,” Whitney said.

Whitney said the victim suffered “a laceration to face, where his nose was almost severed off,” and suffered stab wounds to his back. That man was taken to a local hospital and is expected to survive.

Around 6:25 p.m., plainclothes Garden Grove investigators located the suspect’s silver Mercedes at a 7-11 store at Harbor and 1st Street in Santa Ana.

Whitney said officers confronted the suspect as he left the 7-11 carrying a knife and a handgun. Regardless of his stabbing spree, the suspect dropped both weapons and complied with officers’ demands, and was taken into custody.

Unfortunately, prior to officers’ arrival, the suspect had disarmed a security guard inside the 7-11 and stabbed him. As a result, the security guard was taken to a hospital, where he was pronounced dead, according to Commander Robert Rodriguez with Santa Ana Police Department.

Officers at the scene then learned of another murder that occurred across the street shortly before they arrived and took the suspect into custody.

The man on a stabbing spree had viciously assaulted a customer during a robbery inside a Subway restaurant across the street. Responding Santa Ana police and paramedics attempted life-saving measures, but the man did not survive.

Police do not have a clear motive at this time. Whitney described the attack as random acts of violence and said the suspect was not associated with any of the victims.

“Robbery, hate, homicide. This is all of the above,” Whitney said. “It’s just pure tragedy right now.”

The series of crimes are under investigation by both Garden Grove and Santa Ana Police Departments.