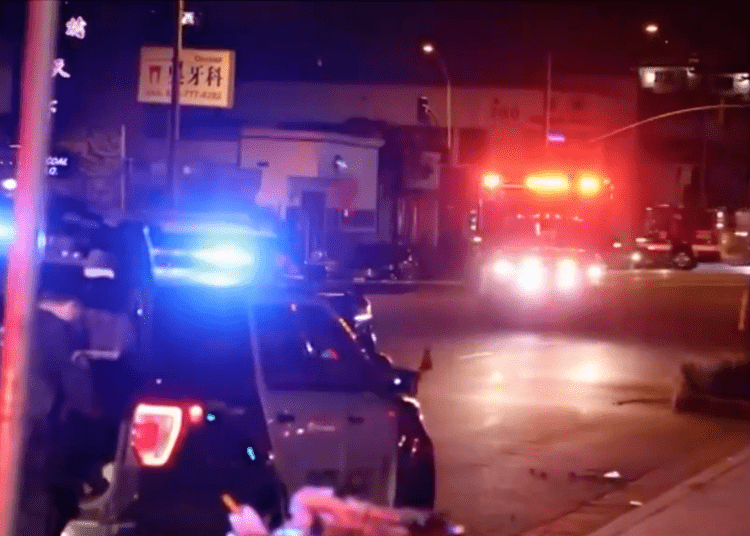 Officials said 10 people were killed and at least 10 others wounded in a mass shooting in Monterey Park, California. (Screenshot FOX 11 Los Angeles)

UPDATE: The suspect was identified and surrounded by a SWAT team. Once the mass shooter was cornered, he reportedly died from a self-inflicted gunshot wound. Read more.

UPDATE: Law enforcement authorities in California released the first photos of the suspected Monterey Park mass shooter who is accused of gunning down 10 people and wounding another 10 on Saturday evening.

On Saturday January 21, 2023 at 10:22 PM the suspect male/adult/Asian pictured above was involved in a shooting. Investigators have identified him as a Homicide suspect and he should be considered armed and dangerous.
Contact LASD Homicide with any information at 323-890-5000. pic.twitter.com/2gPUBBybvv

“On Saturday January 21, 2023 at 10:22 PM the suspect male/adult/Asian pictured above was involved in a shooting. Investigators have identified him as a Homicide suspect and he should be considered armed and dangerous,” the Los Angeles County Sheriff tweeted Sunday.

Photos show the suspect wearing a hat, glasses and a winter coat. He stands at about 5’10” and weighs 150 pounds, according to authorities. He was described earlier Sunday as an Asian male between the ages of 30 and 50, Fox News reported.

The homicide victims include five men and five women, and were all “probably” of Asian descent, according to Los Angeles County Sheriff Robert Luna.

MONTEREY PARK, Calif. – A mass shooting Saturday in Southern California left at least 10 people dead, with at least another 10 wounded, according to officials. The suspect has not been captured.

The mass murder occurred just before 10:30 p.m. in the 100 block of Garvey Avenue in the city of Monterey Park, according to Lieutenant Patricia Thomas of the Los Angeles County Sheriff’s Department. Officials said the massacre took place at a ballroom dance studio following a Lunar New Year celebration, sparking off a manhunt for the suspect. LASD said it has been called to assist Monterey Park police with the manhunt and investigation, KTLA reported.

LASD Capt. Andrew Meyer said Sunday that all 10 murder victims died at the scene. The wounded victims were transported to hospitals and their conditions range from stable to critical.

Meyer said party revelers were “pouring out of the location screaming” when police arrived on scene. He said officers entered the ballroom and discovered the victims as firefighters treated the wounded.

Law enforcement officials said the motive for the shooting remains unclear. The male suspect remains at large and no description has been given. Investigators, said they are also checking reports that an attempted shooting at a the Lai Lai Ballroom in Alhambra is related, FOX 11 Los Angeles reported.

Meyer said it’s too early in the investigation to know if the gunman knew anyone at the ballroom or if it was a hate crime or not. He provided no further details.

Monterey Park is a city of approximately 60,000 resident, which is located about 10 miles from downtown Los Angeles. It has a large Asian population with two days of festivities planned. However, officials cancelled Sunday’s events following the mass shooting, according to KTLA.

Seung Won Choi owns the Clam House seafood barbecue restaurant across the street from where the shooting took place. He said three individuals frantically rushed into his business and told him to lock the door. The people told Choi there was a gunman on the loose, the Los Angeles Times reported.

Wong Wei, who lives nearby, told the newspaper that his friend was in a bathroom at the dance club when the shooting began. When she exited, he said, she saw the suspect and three bodies.

The friend then fled to Wei’s home at around 11 p.m., he said, adding that his friends told him that the shooter appeared to fire indiscriminately with a long gun. “They don’t know why, so they run,” he told the Times.

The city of Monterey Park hosts one of the largest Lunar New Year events in Southern California.