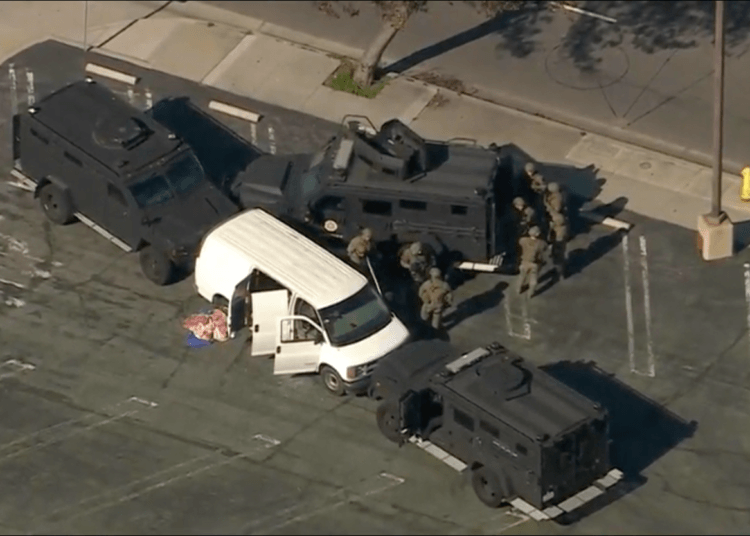 The suspect is accused of killing 10 and wounding 10 others on Saturday night. (Screenshot KTLA)

TORRANCE, Calif. – A bloody mass shooting scene took place inside a ballroom dance studio in Monterey Park, California late Saturday night when a mass murderer opened fire, killing 10 people while also wounding at least 10 others during celebrations of the Lunar New Year. (Update: One of the wounded has died, bringing the death total to 11.)

The hourslong manhunt led investigators and tactical personnel to a white van in Torrance, about 25 miles southwest of Monterey Park, where a person fitting the suspect description was located.

SWAT officers surrounded and breeched the van about 12:57 p.m. Sunday. According to KTLA, the individual in the vehicle was apparently dead, possibly from a self-inflicted gunshot wound.

“On Saturday January 21, 2023 at 10:22 PM the suspect male/adult/Asian pictured [below] was involved in a shooting,” Los Angeles County Sheriff’s Department said earlier. “Investigators have identified him as a Homicide suspect and he should be considered armed and dangerous. Contact LASD Homicide with any information at 323-890-5000.”

On Saturday January 21, 2023 at 10:22 PM the suspect male/adult/Asian pictured above was involved in a shooting. Investigators have identified him as a Homicide suspect and he should be considered armed and dangerous.
Contact LASD Homicide with any information at 323-890-5000. pic.twitter.com/2gPUBBybvv

About 1:06 p.m., witness Mitch Brown told KTLA’s Chip Yost the person inside the van was dead due to a self-inflicted gunshot wound, although authorities did not confirm the information for several hours.

“Law enforcement acted very swiftly and did an awesome job,” Brown said. “They surrounded the vehicle and had him cornered so he wouldn’t be able to leave or try to escape.”

A short time later Brown said, “It looked like the same boggin (wool cap) the suspect was wearing…a black and white-striped, weird design boggin. It looked like he was still wearing that.”

Sunday evening authorities confirmed the shooting suspect was dead. He is identified as Huu Can Tran, 72, who died of a self-inflicted gunshot wound inside the white van in Torrance, KTLA reported.

Los Angeles County Sheriff Robert Luna also confirmed there are no outstanding suspects from the mass shooting, though the investigation remains ongoing as detectives try to determine a motive for the massacre.