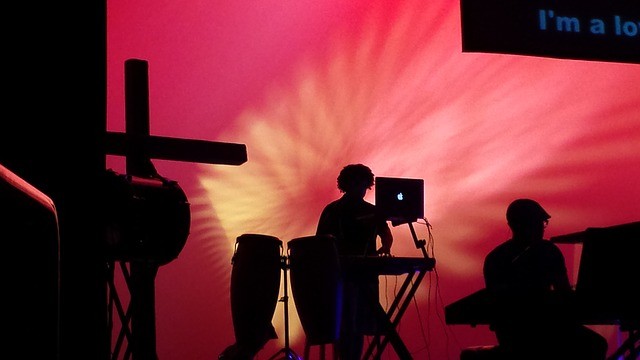 While most churches have closed their doors in compliance with government recommendations to stop the spread of coronavirus, a few are making headlines for their defiance.

The River at Tampa Bay Church in Florida held a crowded service Sunday for its thousands of members, despite a ban of groups of 10 or more people and the church’s online streaming capability, FOX 13 reports.

“They are trying to beat me up, you know, over having the church operational but we are not non-essential,” Dr. Rodney Howard-Browne, the Tampa church’s founding pastor, said during Sunday’s service.

Last week, Howard-Browne said they “brought in 13 machines that basically kill every virus in the place” on YouTube as the sheriff’s office and attorneys for the church are in contact about how to best keep the public safe.

“We feel that it would be wrong for us to close our doors on them, at this time, or any time. In a time of crisis, people are fearful and in need of comfort and community,” the church said in a statement posted to their website.

In a phone interview with Fox News, he says his church had been the target of hostility long before the gathering ban because it serves the poor and needy with its multi-racial congregation in a community that is 88 percent white.

He also says his church offers the only hope for many who suffer. “I have seen members healed of HIV and cancer — diseases [that are] bigger than COVID-19.”

But many are upset. Paul Quinn, a resident of Central who lives near the church, asks why the congregation can’t just go online to keep others safe: “What makes them so special?”

“It’s a serious health hazard,” he said. “They don’t know how many people they’re affecting, and they don’t seem to care. That’s a problem.”

Spell points to Walmart, where hundreds of cars are in the parking lot and “nobody blinks an eye.”

Walmart is open in Baton Rouge near Spell’s church because it has a grocery store inside, enabling it to meet the criteria for being classified essential, but Spell and Howard-Browne say feeding our souls and our spirits are also essential.

Thus far, there are no confirmed cases within their church, Fox News reported.

Meanwhile, Chicago police officers enforced a statewide coronavirus stay-at-home order at an Assyrian church Sunday, dispersing a large crowd that was there for a funeral.

Cops acted after going to St. Odisho Church and seeing a crowd of up to 60 people, many of them elderly, according to reports.

“This is sincerely the last thing we want to do, but public health during this climate is vastly important for everyone,” Chicago police spokesman Anthony Guglielmi, said according to the Chicago Sun-Times.

He said several mourners were seen drinking from the same cup during the service before officers “expedited the completion of the funeral service and dispersed patrons.”

There were no arrests and no one was summoned, Fox reported.

Illinois Gov. J.B. Pritzker’s issued the sweeping stay-at-home order March 21. It is due to expire on April 7.

In the state, at least 4,596 people have tested positive for COVID-19 and 65 have died, the Chicago Sun-Times reported.

As the nation gets more stringent about non-essential travel and bans on group gatherings to slow the spread of coronavirus, one expert says the pandemic may result in an unintended rise in drug and alcohol relapses among those who are in recovery.

Mental health professionals have recently been speaking out about different ways to cope with isolation and anxiety regarding COVID-19, which can also act as triggers for those in recovery, especially when coupled with canceled Alcoholics Anonymous (AA) and Narcotics Anonymous (NA) meetings.

“Social support and active involvement in the program both play a huge role in recovery,” Hulkow said. “In the absence of these, ‘isolation’ and ‘emotional distress’ can be significant ‘triggers’ to relapse. Feelings of depression, anxiety, fear, uncertainty, loneliness and boredom can easily escalate particularly during this time.”

But, Hulkow said, there are still ways to lessen the risk, even in the days of social distancing and quarantine.

“Recovering individuals can utilize different ‘tools’ to cope during this time such as: staying virtually engaged in the program, reading recovery-oriented literature, practicing prayer and meditation, engaging in healthy hobbies when possible, journaling thoughts and feelings, completing arts and crafts projects, being creative and staying present,” she said.

And for those who have limited access to smartphones or other technology, Hulkow pointed out that there are still helplines and hotlines available to offer support, as well as workbooks available that support recovery and are still used by AA and NA. Hulkow also advised turning to resources offered by the Substance Abuse and Mental Health Services Administration and the National Institute on Drug Abuse for support.

She also added that those who are living with a person in recovery can help play a big role in supporting them.

“Supporters can contribute by creating a safe and healthy environment around the home; creating opportunities for open and honest communication, and actively listening,” she said, adding that setting and maintaining clear boundaries as well as staying alert to notice warning signs of a potential relapse can also help.

Potential signs can be different for every individual, cautioned Hulkow, but she added that it’s often close friends and family who are the first to notice subtle changes in behavior that could signal oncoming trouble. Typical signs can include a change in attitude, loss of daily structure, poor self-care, elevated stress, emotional reactivity, impulsive behavior, social isolation, and physical symptoms of either intoxication or withdrawal.

“The person in recovery can benefit from maintaining a structured routine as ‘normal’ as possible,” Hulkow advised, adding that staying virtually connective to support friends, family, sponsors or others in recovery can also play an important role in staying on track.

Maintaining a healthy diet and practicing self-care like getting regular exercise and adequate sleep can also help, as well as finding a healthy outlet to relieve stress.

“This is a significant challenge for individuals recovering from alcohol and drug addiction,” Hulkow said, of social distancing and isolation. “It is important to find alternative ways to receive ongoing support during this time. AA/NA and other support groups have ‘virtual meetings’ available online. There are also other options to stay connected via social media as well as by telephone or email.”

Celebrate Recovery is a Christ-centered, 12 step recovery program for anyone struggling with hurt, pain or addiction of any kind.

“Celebrate Recovery is a safe place to find community and freedom from the issues that are controlling our life,” their leadership says.

There are now 35,000 Celebrate Recovery churches around the world, according to their website. To date, over 5 million individuals have completed a Step Study. They also are ingrained into prison systems to help inmates recover from various addictions as well.

Hence, the question lingers; Are these gatherings essential? Many would say yes, and therefore, the same social distancing rules can apply at church as they would at the local Costco or Walmart.