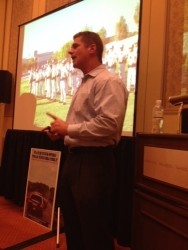 SHOT Show is underway in Las Vegas and it’s something to behold: 13 acres of exhibits, celebrity sightings and more than 60,000 gun-loving attendees. What’s more: Law Officer was once again all over it.

The National Shooting Sports Foundation and Law Officer have once again teamed up to bring LEOs attending shot—and there are a lot of them—the latest in law enforcement training (LEEP). A little medicine with the Las Vegas candy, if you will. The demand is impressive.

Most sessions were filled upon registration. From John T. Meyer on low-light tactics to Meggitt engineers on how to set up gun ranges to NTOA’s sessions on tactics to optics adaptors lesson—it was truly top-tier from beginning to end.

The Below 100 presentation on Tuesday morning was filled beyond capacity. In attendance was John Shanks, law enforcement liaison with the National Law Enforcement Memorial Fund.

“We need to change the culture,” said Shanks, when introduced. “That’s what Below 100 is all about.”

The evidence that Below 100 is having an effect on law enforcement culture is compelling. Law Officer launched Below 100 in earnest in 2012. That year saw 54 fewer line-of-duty deaths (LODDs) than the year prior. A happy coincidence? Well, 2013 just posted the lowest number of LODDs since 1944: 106. The culture is changing.

Marc Joseph, who retired last month as deputy chief of police for Las Vegas Metro, shared with the audience his agency’s harrowing experience: In 2009, LVMPD lost three officers to car crashes, which might have been survivable had departmental guidelines been followed. The problem: “We’d do our 40 hours of driver training and never talk about it again,” said Joseph.

“Crashes are at a minimum embarrassing. They’re also expensive,” he explained. “In half of all cases it’s the citizens who are at fault, who hit us!” LVMPD began a heroic transformation to make driver safety—and a culture of safety more generally—part of its identity.

“Gloom and doom wouldn’t work for an agency that had just attended four funerals, three from crashes,” Joseph said. So the agency endeavoured instead to celebrate its heroes: Officers who came forth to tell of their close calls. They also celebrated consecutive crash-free days with cupcakes and pizza. It worked.

It’s sobering to step out of a Below 100 session and into the rigmarole of Las Vegas, truly a reminder of what’s important now.