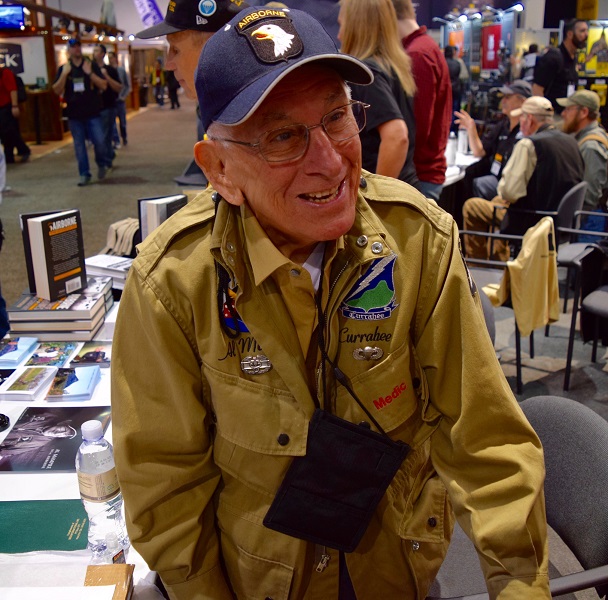 As I moved about the Show among so many well know shooters and companies, I knew that there was one man present, who along with all his Brothers made possible this show and all the freedoms we enjoy. Before I headed out west, I made a call to check to see if a friend would be at the Show; he told me he would be and to come find him. Sgt. Al Mampre – E Co. 506th PIR  of the 101st Airborne Div. / Band of Brothers WWII was in attendance at the Otis display. Along with Al was his Band of Brothers partner, Col. Ed Shames. I had not met Col. Shames previously. It is hard to adequately describe these men. They truly saved the world and then returned home to live as regular men. There is nothing “regular” about them. The California para-rescue jumpers brought Al and Ed to the Show and looked after them. Al is a member of our tactical officers association and our great friend.  I can say there are no better men and along with their partner, Ed “Doc” Pepping who could not be there, they are the true heroes of this nation; along with all our military men and women who serve today along with our veterans.

Ruger debuted their American polymer frame, striker fired pistol. The magazine holds 17 rounds and it is duty sized 9m/m pistol. Grip design allows for interchangable backstraps to fit different hand size and trigger finger length. Fit of the hand to handgun is the starting point for effective shooting capability and Ruger looks to have made the effort to get this right. The design allows a high hand grip that coupled with a low bore axis offers good handling and shooting qualities. The Ruger American pistol has a heavy duty extractor which is a desirable feature for durability. Overall, it has the solid feel that I associate with Ruger. The only negative is the display’s model trigger felt longer on reset than other duty pistols in this category and a bit mushy. A test is in order and I will report.

Springfield Armory has been a long time supporter of our tactical officers association, so it was great to see our friend Lexi and catch up on what is new. Their Range Officer series has been so successful that they used it as a base gun for their new  Range Officer Operator. A full size 5 inch model with a light rail, fiber optic front sight, available in either 9 m/m with a ramped barrel or .45 auto non-ramped. With a matte blue finish, the price is right, at $849. For those looking for a 1911 rail gun, the RO Operator will be high on the list.

An additon to their XDM line is a .45 full size that incorportes a threaded barrel for a suppressor and enhanced sights.
Among the many manufacturers, Springfield is known for their exemplary product support and customer service.

Kimber’s roll out is a .357 snub revolver. Known for their line of 1911’s and smaller concealed carry semi-autos, their departure into revolver building is called the model  K6S, an all stainless steel six shot with a two inch barrel. It has a clean set of blued fixed sights and a Ruger type cylinder latch. This is not a lightweight snub, coming in at 23 ounces. Compare that to an S&W airweight 340 PD .357 mag. at 11.5 oz. and a Ruger LCR .357 mag. at 17.1 oz.  However, having shot the superlightweight snubs such as the 340 and 342 Smith’s, it is a trade off between weight and pain. The recoil and sting of the small lightest weight revolvers has to be experienced. Easier to carry and harder to shoot is our motto, The Kimber is likely heavier than you want for a pocket pistol but for those looking for an all steel .357 mag. that is a powerful and concealable companion, this may be the choice. Price for the Kimber KS6 is $899, compared to the  S&W scandium 340 PD at $1000, and the Ruger LCR at $649. These are MSRP and law enforcement price should be lower.

Keltec had their line up on display and I wanted to see the new version of the Sub2000 pistol caliber carbine. I tested their original Sub-9, an all metal 9m/m version years back before they moved to the polymer frame Sub2000. The unique aspect of this carbine is that it folds in half. A pull of the hinged trigger guard and you have a long gun that can be carried in a brief case or small carry bag for undercover or covert operations. You can order the Sub2000 for various magazine types, including Glock, Smith and Wesson, Beretta, and Sig. An officer in a recent class we did had one with the Glock 19 grip. It also allows use of the longer 17 and extended 30 round mags so looks to be the way to go if you are carrying a Glock. The Sub 2000 also comes in .40 Smith and Wesson caliber. Keltec designed this third version with improved sights, adjustable length stock and a Picatinny rail and M-LOCK forend. The model in the photo has a Surefire X300 light attached. I had looked for one before coming to the Show and found them scarce as demand is high. MSRP is $500.

Keltec’s bullpup rifles are another item of interest. Called the Rifle – Forward-Ejecting Bullpup or RFB, in both 5.56 and 7.62 m/m. The bullpup is named for the design that puts the action and magazine well next to and under the shooter’s face instead of in front thereby making for a very short overall length. With the forward ejection, it is ambidexterous as there is no ejection port next to the shooter’s face. At $1929 MSRP it is not inexpensive but it is very cool. I hope to include the 5.56 m/m in the lightweight rifle testing.

Inland Manufacturing is a name well known to military M-1 carbine collectors. The original Inland was a division of General Motors and produced more of the short carbines than any other manufacturer with over 2.6 million carbines made during WWII. In the 1960‘s other companies produced copies of the M-1 but they were not the originals.

Today, Inland is back making M-1 carbines. Not a division of GM, the company produces true to spec. military carbines:  A standard model, the folding stock parachute model, a short barrel rifle version, and a stockless pistol.

I shot the standard model with a suppressor. A great shooter and very low noise. A lot of fun and history remade.