Sheriff: ‘By the grace of God’ infant survived getting tossed down embankment – Mother arrested 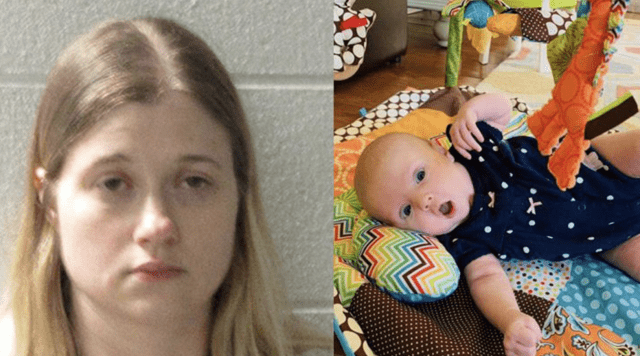 Krista Madden, 35, of Asheville is accused of trying to kill her 7-week-old baby Shaylie after tossing her down a ravine, police said (Henderson County Sheriff's Office/ Asheville Police Department)

ASHEVILLE, N.C. – The suspected kidnapping of a North Carolina infant during a carjacking has led to the arrest of the child’s mother on a charge of attempted murder, authorities said Friday.

Krista Madden, 35, of Asheville, N.C., was accused of trying to kill her 7-week-old baby Thursday by tossing the child over a bank in a child’s car seat, Henderson County Sheriff Lowell Griffin said during a news conference.

It was only “by the grace of God” that the infant survived, the sheriff said.

Vehicle has been located in Henderson County. We are still searching for the missing child. Described as a 7-week old female, goes by the name of Shaylie. Last seen wearing a pink onesie w/horizontal white stripes. pic.twitter.com/s2NqD55tR8

The baby, Shaylie Madden was found Thursday after a 75-foot plunge down a ravine, Griffin said. The baby and the car seat were found near each other.

Shaylie was taken to the hospital, reported Fox Carolina.

“It’s my understanding that she is in very good condition,” he said.

According to Madden’s Facebook page, she is a nurse, Fox News reported. The woman told police that she and the baby had been carjacked in Asheville Thursday afternoon. Nearly two hours later deputies found Madden 20 miles away in Henderson County near a church. Moreover, authorities also found her abandoned car.

Police said Madden told them she had managed to get away from the carjackers who took her baby.

Authorities said she also told them that the carjackers were a man and a woman who wore ski masks.

“We don’t believe that to be factual at all,” Griffin said. “We don’t have any reason to believe it is based on anything.”

The sheriff said that two hours after finding Madden, Shaylie was found by a family.

Courtney Fowler told Fox Carolina how she and her father found Shaylie after hearing a baby’s faint cries.

Fowler says Shaylie was bruised and scraped, but believed Shaylie would be okay. She also had seen photos of Shaylie on Facebook but didn’t read into stories posted online about what was going on. Only until after Shaylie was taken by EMS did it all connect for her.