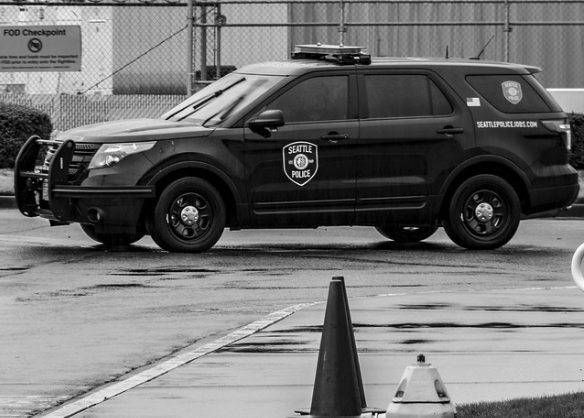 SEATTLE – A residential burglary suspect in North Seattle was hospitalized and later arrested after negligently shooting himself in the head as he tried to flee the scene of a crime, authorities said.

Police received a call from a Seattle homeowner who heard noises coming from his garage early Wednesday morning, according to the Seattle Police Department Blotter.

The victim investigated the sounds originating from the garage and discovered a masked suspect. The home intruder bolted after being spotted while the victim grabbed a broom and chased the suspect to a van in a nearby parking lot.

When the thief reached the vehicle, which turned out to be stolen, he raised a firearm and cautioned the victim to retreat.

SPD said the victim turned away from the suspect and later heard a gun discharge as the suspect’s vehicle sped away.

The victim returned home and called police to report the burglary. When officers arrived, he provided a suspect description, to include clothing worn by the intruder, Fox News reported.

Soon after, officers received a radio broadcast that a man had arrived at First Hill Hospital with a gunshot wound to his head.

“Officers went to the hospital, found the injured man was wearing the same clothing as the suspect in the earlier burglary. Police believe the suspect accidentally fired his handgun while climbing into his van, striking himself in the head,” SPD said in the Blotter. “Officers also learned the suspect’s van was reported stolen and had been used in another crime outside of Seattle. Additionally, the suspect is also a convicted felon, unable to legally possess firearms.”

The unnamed suspect is still being treated for the gunshot wound. He faces a number of charges, which include burglary, felony harassment, possession of a stolen vehicle and unlawful possession of a firearm.

Once he is medically cleared the suspect is expected to be booked at the King County Jail.