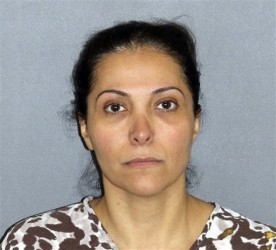 SANTA ANA, California (AP) — Arraignment of a Saudi princess on a charge of human trafficking in the U.S. has been postponed.

Meshael Alayban, 42, appeared in Orange County Superior Court on Thursday, but her attorney requested a delay and the judge rescheduled the hearing to July 29.

Alayban was arrested after a 30-year-old domestic worker from Kenya alleged she was forced to work excessive hours and was not allowed to leave. The worker said she was hired in Kenya in 2012 and taken to Saudi Arabia, where her passport was taken from her.

The judge issued a protective order barring Alayban from communicating with the worker, whose name was not released.

The Kenyan woman told authorities she was forced to work excessive hours, was paid less than promised and was not allowed to leave.

Authorities said the woman had signed a two-year contract with an employment agency guaranteeing she would be paid $1,600 a month to work eight hours a day, five days a week. But starting in March 2012, she was forced to cook, clean and do other household chores for 16 hours a day, seven days a week, and was paid only $220 a month, prosecutors said.

She was allowed to have a passport only long enough to enter the U.S., prosecutors said.

A judge set Alayban's bail at $5 million, ordered GPS monitoring and banned her from leaving the county without authorization.

Alayban's attorney, Paul Meyer, said the case was a contractual dispute and argued his client shouldn't be assigned a ransom-like bail solely because she was rich.

Four other workers from the Philippines left the condominium voluntarily after authorities arrived. No charges have been filed related to those women, and police said there were no signs any of the workers had been physically abused.

Share and speak up for justice, law & order...
Tags: GPSInvestigationsNews