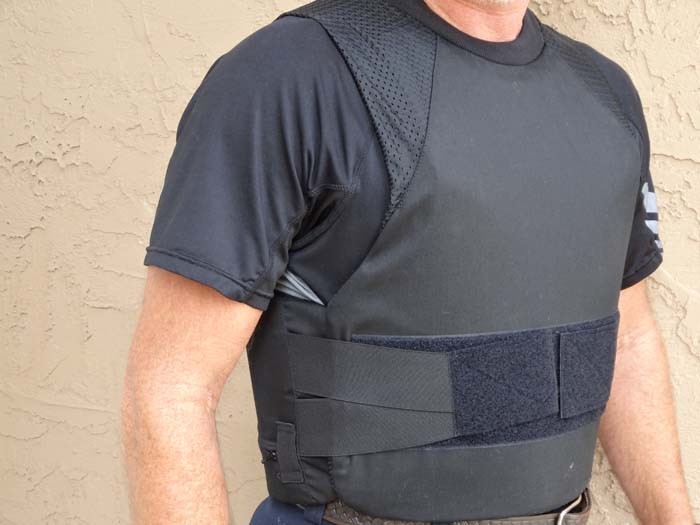 In March of this year, I received a request to test and evaluate a new concealable body armor manufactured by SafeGuard Armor, a company I was not familiar with at the time. I spoke with the manufacturer’s representative, Anthony McGrath, and learned that the company, based in the United Kingdom, but with operations in Rogersville, Miss. has produced a variety of body armor since 2006.

SafeGuard utilizes DuPont Kevlar materials, the leading industry standard to protect the wearer from injury. Ballistic panels are available in either level II or IIIa threat protection ratings and can also include level 1 or 2 protection against an edged weapon, a spike, or both. All vests meet the most current National Institute of Justice standards.

Shortly after our conversation, the vest arrived. I was impressed that the vest came with its own durable nylon carry bag, which I learned is standard procedure for vests supplied by SafeGuard. (When available from other manufacturers, this is usually an added option at an additional cost.) Since I had only provided a generic size, I was concerned that the fit may not be what I am accustomed to—every vest I’ve worn in the last 26 years has been custom fit, with the vendor taking personal measurements and the vest made to those specifications. The upside to this process is the best fit possible. The downside is a relatively long wait between order and delivery. The SafeGuard vest arrived in just three days and I can honestly say that the fit was as good as any I’ve experienced.

I inspected the vest and saw that the panel carrier resembled a football jersey in the sense that it had literally hundreds of tiny holes cut into the material. This is part of the CoolMax design, and works effectively to aid in cooling. Two other observations I made were that there were no over-the-shoulder adjustment straps and that the side waist straps joined two in the back into one in the front. While I was initially concerned that the lack of over-the-shoulder straps might be problematic (there was no way to adjust the vest up and down for fit), my concern proved unfounded. The side straps were very effective at securing the vest while not being uncomfortable to wear. Unlike some vests I’ve worn, the side panels themselves were comfortable even though they overlapped somewhat, which did cause a slight visible protrusion beneath my uniform shirt. There was more than adequate protection while still allowing for a full and unencumbered range of motion.

Since my current assignment is working plainclothes in vice and narcotics, I do not wear body armor on a regular basis. In order to effectively evaluate this vest, I wore the ballistic panels in an external carrier while conducting warrant services and gang sweeps as well as during firearms and defensive tactics training. I also wore it in its concealable carrier during required uniformed events.

Switching the ballistic panels back and forth between the concealable carrier and the external carrier was quite easy to do as a result of a convenient zipper on the bottom of both the front and back carrier. This is also a nice feature for routine laundering of the carrier. In order to properly evaluate its daily comfort, I also wore it beneath a t-shirt on some occasions. Based upon the past four months with the vest, I can attest to the comfort of the ballistic panels as well as the effectiveness of the CoolMax carrier.

CHRIS BOYD is a 26-year veteran of the Carlsbad (Calif.) Police Department. He has worked patrol, K-9, motors, and investigations. He is currently assigned as a sergeant supervising vice and narcotics. He is also the entry element team leader on SWAT and the department’s range master.