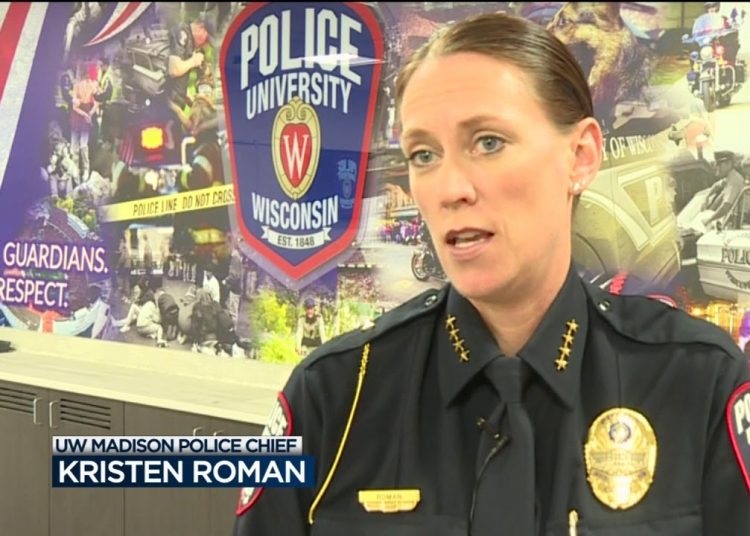 Madison, Wisconsin — UW-Madison Police Chief Kristen Roman has made the news often in recent weeks. We previously reported on her elimination of the “thin blue line” on objects within the police department a few weeks ago. And now Chief Roman announced that any additional officers that are hired to work University of Wisconsin football games will undergo “an additional layer of vetting.” According to Chief Roman, officers from other agencies will need to prove their performance histories do not include complaints on excessive use of force or violations of civil rights—before they can join the local force at and around Camp Randall Stadium according to Madison.com. The vetting will also include de-escalation practices to training materials required for the additional officers.

Before we tell you exactly how ridiculous this is, we do want to say that Roman talks a great “woke” game. And to the novice observer, her demands may even sound somewhat reasonable. However, while it all sounds well-intentioned and progressive, and Roman may seem to have become a master of the virtue-signaling game of deceptive words and decisions, she hardly seems to recognize how any of this is actually undermining public safety.

A Solution for a Problem That Doesn’t Exist

According to Roman, the additional background checks of officers’ history and cultural competencies are new, saying “what we have done is tuning into and responding to what we have seen across the country around questions of police abuse, promoting racial equity and justice and wanting to make sure that we were using the opportunity to apply that particular lens to how we were approaching enlisting support from other agencies to police game days.”

First, did you notice that Roman never defines what any of this means. She says she is “tuning in and responding to what we seen across the country”—as if football games are the new ground zero for a yet-to-be-evidenced rampant outbreak of unchecked police aggression, based upon a flawed sense of inequality of course.

So what is Chief Roman actually “tuning in to”? Was it the overdose death of George Floyd hundreds of miles away? Or dare we even ask, is this actually based on anything actually observed and warranted based upon officer behavior under her leadership? If so, it sounds like a failure of leadership more than anything else. But let’s not let leadership get in the way of hypocrisy for Chief Roman’s sake.

And let’s not overlook how this additional vetting is a shamiracle—a bit of a sham, and a bit of a miracle that doesn’t actually fix anything in need of fixing nor truly provide any real explanation about anything.

CHIEF ROMAN THINKS ‘COWARDLY EMPLOYEE’ LEAKED E-MAIL, THEY DID NOT

Further, and truth be told, we have no idea what Chief Roman means by promoting “racial equity and justice”—by using a “lens” to pretend to examine an officer’s past based upon some make-believe scrutiny? And further still, what actually indicates and merits a disqualification. Like other woke-minded wanna-be leaders, the specifics aren’t defined. And even if we consisder her language of “complaints,” does that mean complaints alone mean someone is not for “racial equity” or “justice”?

Roman does not say she is looking for “complaints” with evidence of wrongdoing—she’s indicated she’s looking for complaints, period. Never mind that people often file complaints to simply get out of wrong-doing, from parking tickets to felonies.

Is that equity…is that justice?

No matter what Chief Roman actually means, none of it appears to be based upon due process or actual wrongdoing because once again, if you didn’t know, citizens complaining on cops for just about anything is a forgone conclusion. It happens and just because it happens means nothing in terms of right and wrong—or an officer’s sense of equality.

And while she speaks of trends, there is certainly a growing trend of Chief Roman’s problematic agenda-pushing “announcements” based upon vague terminology and less-than-thorough systematic thinking.

First, she banned the thin blue line. Now, it appears she will be looking at “complaints” about officers—rather than actions that have been adjudicated through a disciplinary process. And we fear to wonder what Chief Roman will conjure up next to put her wokeness in the limelight—and gain attention for herself at the sake of actually improving public safety during football games or any other time on campus.

Contact the University of Wisconsin-Madison to share your opinion about Chief Roman’s banning of the Thin Blue Line and the “additional vetting: