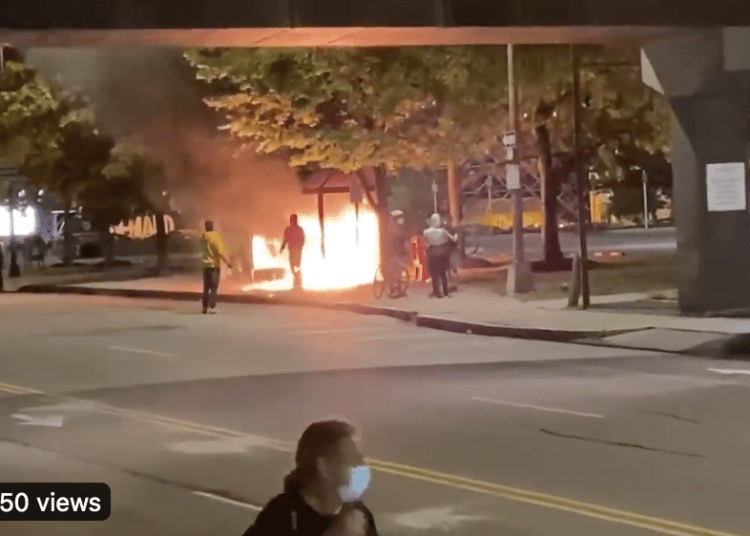 Protesters clashed with police for a third night after the leader of Rochester’s police union defended the seven officers linked to the custodial death of Daniel Prude, 41, Fox reported.

Prude, a Black man, died March 30 of asphyxiation, with drug use a contributing factor, after police placed a “spit bag” over his head during his arrest a week earlier.

In the hours leading up to Prude’s fatal encounter with police, he was making suicidal statements and threw himself down a flight of stairs, his brother said, according to CNN.

Joe Prude is seen in police body camera footage telling a police officer about Daniel’s erratic behavior after his brother arrived in New York from Chicago on March 22.

The footage, provided to CNN by attorneys for the Prude family, shows Joe talking with an officer shortly after 3 a.m. on March 23.

Joe Prude said he called police after Daniel suddenly ran from his home and he was worried his brother may have been hit by a train passing nearby.

Joe tells the responding officer Daniel was on the drug PCP and was hallucinating earlier in the day. Joe describes Daniel making suicidal statements and throwing himself “head first” down 21 stairs into a basement.

Joe said he called police and Daniel was taken to Strong Memorial Hospital. He was there for “only a few hours,” before a medical taxi dropped him off back at Joe’s home. Joe told the officer Daniel was “calm” after returning from the hospital and didn’t make more suicidal statements.

Joe said Daniel asked for a cigarette and when he went to get one Daniel ran out the back door. Daniel was wearing a white tank top and black long johns when he left. He wasn’t wearing shoes or a coat, Joe said.

At one point in the video, a call is heard on the officer’s radio describing an unclothed male with blood on him.

Daniel Prude was approached by police in a different area of Rochester at approximately 3:16 a.m., according to body camera footage from three responding officers. He is naked in the video.

After Daniel is taken to the hospital following his interaction with police, an officer returns to Joe’s home around 4 a.m., saying “the bosses” want an officer to stay with them “until they figure some more stuff out.”

Crowds gathered earlier on Friday evening and first came face to face with police around 11 p.m., with a subsequent clash later in the night, Spectrum News reported. Eleven people were arrested for a number of charges, ranging from unlawful assembly to rioting.

Three officers were treated for cuts and bruises to their hands and legs, with one officer suffering neck burns, police said. The officers were later released.

During the first confrontation, police declared the protest “unlawful,” at which point the group of protesters split into two. Most reportedly turned and headed for MLK Jr. Park, but some continued to confront police, throwing rocks, bottles and debris.

An hour later, police and protesters clashed again, with protesters allegedly throwing fireworks, as seen in footage captured by local news crews. Rioters set fires to property in the area around the protests.

“An officer doesn’t have the ability to go off-script,” Michael Mazzeo, the union president, said at a news conference, the Rochester Democrat and Chronicle reported. “They have to follow protocol and do what they are trained to do.”