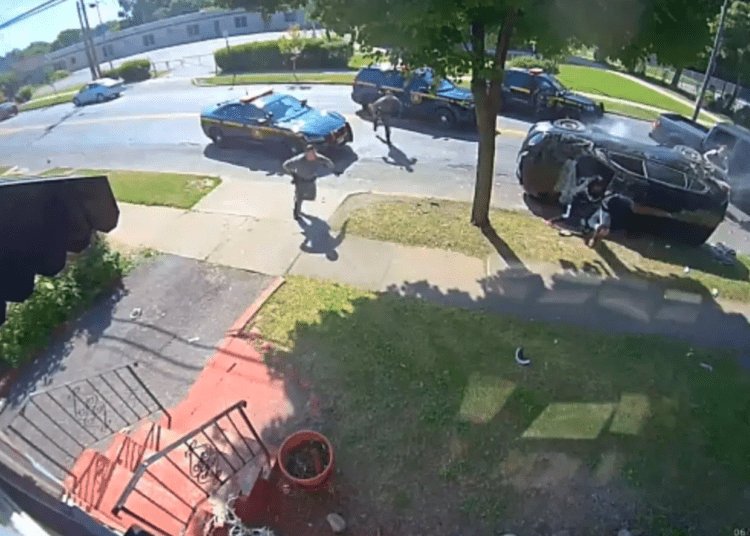 The fleeing suspects are apprehended by police. (SAI via ViralHog)

ROCHESTER, N.Y. – A Ring doorbell camera at a home in Rochester recorded the termination point of a police chase, showing a vehicle flipping over twice before coming to rest.

Javar Marshall, 21, and Nasir Schifano, 19, were inside the black SUV at the time of the crash. They were quickly taken into custody as they tried to flee the scene on foot, according to the Rochester Police Department.

The dramatic incident occurred in the New York neighborhood on Wednesday, at approximately 4:30 p.m., WHEC reported. The doorbell camera captures the black SUV turning quickly onto the street when it loses control and flips over.

The vehicle rolls down the street before it crashes into a tree and skids to a halt, the video appears to show. (SAI via ViralHog)

After the SUV rolls to rest on its side, two suspects kicked out the front windshield to make their escape. However, they were quickly apprehended by pursuing officers, Fox News reported.

The suspects were charged with two counts of Criminal Possession of a Weapon in the Second Degree when officers found a loaded firearm.

“It looked like a movie, like a scene from a movie,” Sean Irizarry, a resident of the neighborhood, told a local news outlet, according to Fox.

“I heard some screeching, so I could hear the car accident, and I ran to the front of the driveway, and that’s when I (saw) the car flip over right in front of the driveway,” the resident added. “The police officers pulled up and they came out with their weapons drawn and so that made me want to — well, I just ran away.”

After receiving medical treatment for minor injuries, the suspects were booked at the Monroe County Jail.