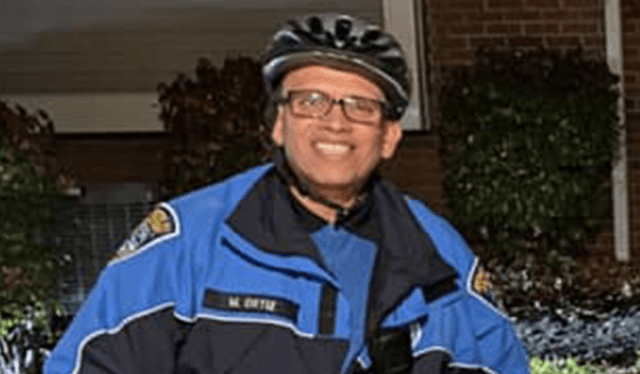 by Law Officer
in Investigations, News, Officer Down
237 18
0

ROCHESTER, N.Y. –The Rochester police officer who died in a “tragic accident” over the weekend crashed his SUV after inadvertently shooting himself in the leg, investigators revealed Monday.

Officer Manuel Ortiz of the Rochester Police Department was heading to work Saturday night when his personal Smith and Wesson M&P 9mm handgun somehow discharged inside his vehicle, striking an artery, Monroe County Sheriff Todd Baxter said. As a result, Ortiz swerved across a road shortly afterward and plunged into a ravine in the town of Penfield. Consequently, police responded to the collision and applied medical aid – but Ortiz, 52, eventually was pronounced dead at the scene, reported the Rochester Democrat & Chronicle.

“There’s going to be a few questions we will never be able to answer,” Baxter told reporters Monday. “But the fact pattern shows that the weapon was outside of the holster at the time and it looks like an accidental discharge…down through his thigh.”

Baxter said Ortiz called his fiancée prior to the crash and told her he accidentally shot himself in the leg and was heading to a local hospital for treatment. She immediately called 911 – as did witnesses who saw Ortiz’s vehicle veer off the road, Baxter added.

A medical examiner’s autopsy concluded Ortiz died from the unintentional self-inflicted gunshot wound, Baxter said. Investigators recovered a single bullet casing lodged in the driver’s side door of his car.

The Rochester Police Department said earlier that Ortiz died “after a tragic accident.”

“Manny meant a lot to this department and this community,” the Rochester Democrat & Chronicle quoted Chief La’Ron Singletary as saying. “We lost a great one.  He was a giant in this department, a cop’s cop, a true servant of his community.”

Monroe County Sheriff Todd Baxter shares details on accidental discharge that struck Officer Ortiz in his leg striking femoral artery. Ortiz called his fiancé to say he accidentally shot self and was driving to hospital before he drove off rd #roc @DandC pic.twitter.com/nyOGioeiHC

Ortiz served the department for 22 years and leaves behind a fiancée and three children, the newspaper added.

Rochester Police say Ortiz was part of its community affairs bureau and posted on Facebook a picture of him on Halloween working a bike patrol shift.

Ortiz served the department for 22 years and leaves behind a fiancé and three children, the newspaper added.