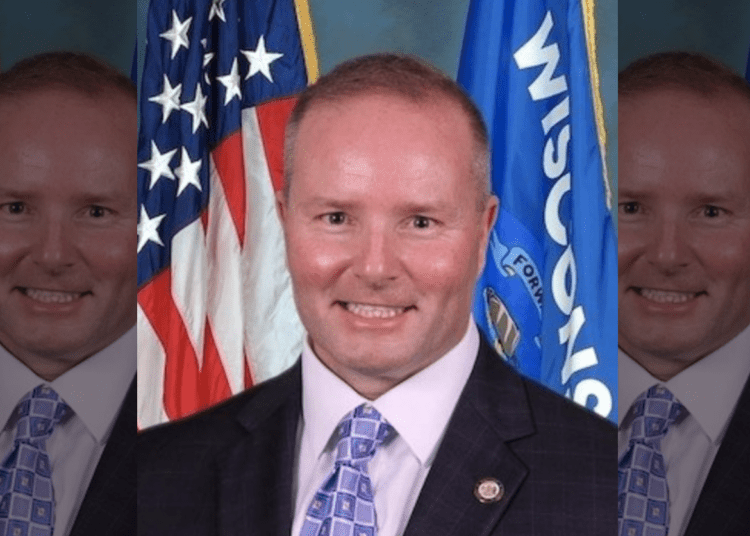 Phillip Thiessen, 55, a retired peace officer, was targeted during a vehicular homicide for being white. (Legacy.com)

Thiessen graduated from L.P. Goodrich High School in 1983. He joined the U.S. Marine Corps in February of 1984, and served for 4 years. He then was employed as police officer with the City of Fairfax, Va. for 26 years. After retiring from the Fairfax Police Department, Thiessen was a Special Agent with the Wisconsin Department of Justice for almost two years before officially retiring in Fond du Lac, according to his obituary.

Thiessen investigated crimes against children while working at the Wisconsin DOJ. After his retirement in 2018, he volunteered at the local food pantry.

Investigators arrived at the scene to find Thiessen’s body, witnesses trying to render aid, and Navarro standing nearby waiting for deputies, accord to law enforcement officials.

When a patrol sergeant arrived, the sheriff said Navarro stated he had intentionally slammed into the motorcycle and passed a field sobriety test.

Navarro is accused of targeting the motorcycle due to the rider’s race and the fact that injuries in such a crash would likely be fatal, Waldschmidt said.

Navarro was not injured in the vehicular homicide.

The complaint said Navarro told investigators he believed he was “intentionally contaminated with chemical sterilizer on a jacket by an employment supervisor in Ripon a year and a half prior,” and “a friend poisoned him by giving him acid a year and a half ago.” He added that he was “still being poisoned by a neighbor.” He added that he “can hear one of his neighbors making racist comments through the walls.” He said “they” drive by his house and rev their engines or squeal their tires, and “they” know who he is. He said “they” are “trying to upset him” but he “doesn’t get angry.” He said “those who are poisoning him, giving him acid and making racist comments are all Caucasian and targeting him because he is Mexican,”  Fox 6 reported.

He said the day of the crash, he took the truck out for a drive to charge up the battery and saw the motorcycle and “intentionally swerved with intent to kill the driver.” According to the complaint, he said he had been “thinking about targeting a white person and killing them with a vehicle earlier that day,” and he “picked a motorcycle because he wanted the person to die,” noting that “white people drive motorcycles,” and “the Harley culture is made up of white racists.” He said he “wanted to go to prison to be free from his neighbors,” and he “knows what he did was wrong.”

Prosecutors noted a 2019 disorderly conduct/domestic violence incident after which officials tried to place Navarro under a 72-hour mental health hold, but the request was denied by the crisis hotline.

Investigators said they filed homicide and hate crime charges, adding that although the attack was targeted based on race, Navarro did not know Thiessen was a retired member of the law enforcement community.