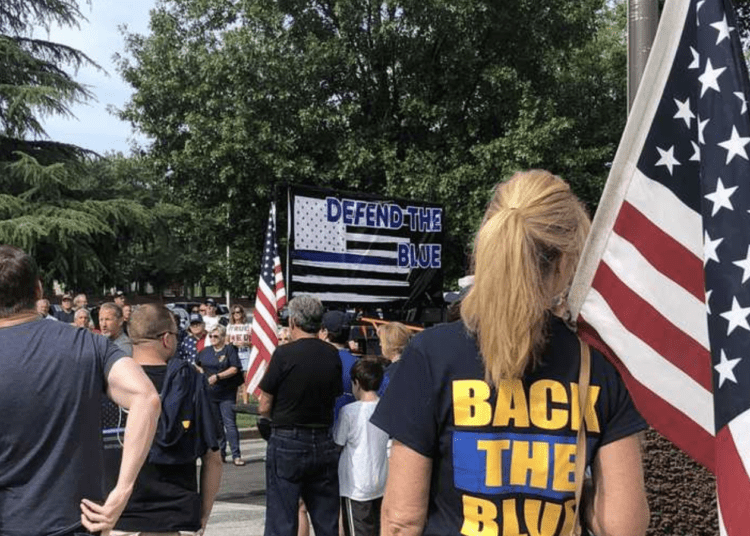 Drive to Defend the Blue (Photo via WYFF)

WASHINGTON, D.C. – Republicans have put together a plan to push law enforcement friendly legislation. The move comes as the GOP anticipates they will become the majority in Congress after the November midterm elections.

In 2021, House Minority Leader Kevin McCarthy, R-Calif., established the American Security Task Force, which is headed by House Committee on Homeland Security ranking member John Katko, R-N.Y. Katko met with law enforcement on the front lines of the crime and border crises over the last year as part of the task force, and developed solutions that Republicans plan to implement when back in power.

In an exclusive with Fox Digital, the list of priorities include ensuring resourcing and funding for law enforcement, addressing and tackling recruitment issues, taking action to stop violence against officers and penalizing “progressive” prosecutors.

“These pillars we came up with are trying to attack the defunding issue, but also the retention issue, and the disrespect to law enforcement issue, which is really terrible and targeted,” Katko said.

Another key component of the plan is to stop more liberal district attorneys and other “soft-on-crime” prosecutors, which the GOP plans to do by stripping away federal funding.

“A lot of them get federal dollars…We are not going to fund progressive prosecutors’ ability to become apologists for criminals anymore. We’re just not going to do it,” continued Katko.

The Republicans’ framework is designed to ensure that law enforcement will receive necessary funding without excessive federal government “red tape” or interference. In addition, the lawmakers reference a survey that noted retirements of police officers were up by 45% in 2021 and departments were finding it difficult to fill empty positions.

One solution being discussed is to have Congress direct federal grants for recruitment use.

Katko said traveling to all the different task force events revealed the “bleak” state of law enforcement across the country, that is worse than any other point throughout his over two decades working with law enforcement.

“It really was jaw dropping… never have I seen law enforcement in such a bad state. From a morale standpoint. From a statistical standpoint. And the picture seems quite bleak going forward,” said Katko.

“Law enforcement are very, very supportive of what we want to do,” Katko said, noting that the Republicans didn’t just look at statistics they went to “law enforcement representatives, unions, front line people, not to bulls— politicians” to come up with their plan.

“The Democratic Party across this country caused these problems. And the American people are not stupid, they’re not going to buy what the administration’s laying out,” said Katko.

Share and speak up for justice, law & order...
Continue Reading
Tags: Back the Blueelectionmust-readrecruitingrepublicans