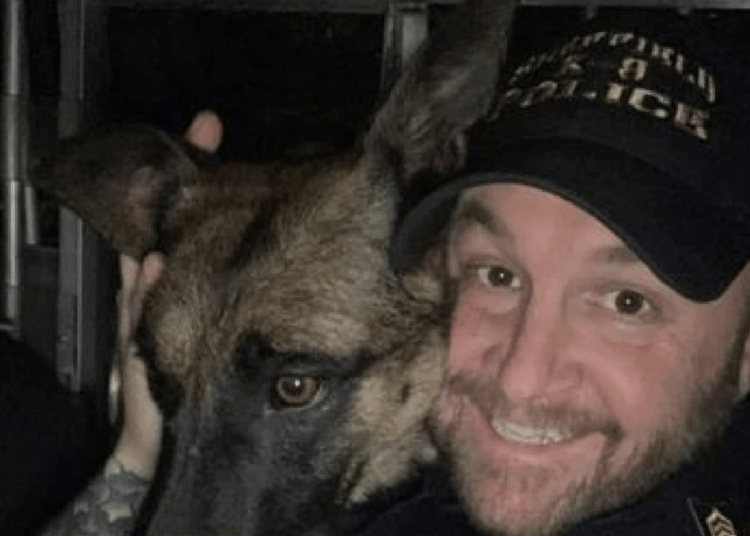 SHEFFIELD, Ala. — Sgt. Nick Risner served the community of Sheffield for more than eight years. Sadly, he was gunned down protecting the community he loved so much.

Risner began his career protecting people when he joined the U.S. Army Reserve and served for eight years. He then became a police officer with the Sheffield Police Department, and soon after became a K9 handler for the agency, WAFF reported.

Risner was one of several officers that responded to a call on Friday after someone reported a person was laying on the road on Avalon Ave. Officers quickly discovered the person was a gunshot victim and witnesses were able to provide a suspect vehicle description.

After a period of time Sheffield Police located the vehicle in Muscle Shoals and were soon engaged in a pursuit as the suspect fled.

The chase terminated behind the old Southgate Mall in Muscle Shoals and the suspect opened fire on officers. Police returned gunfire and the suspect was wounded. However, two Sheffield officers were hit, including Risner. He was transported to Huntsville Hospital. The second officer reportedly took strikes to the body armor, according to WAFF.

Risner’s family remained by his side the entire time he was in the hospital. His brother, Billy Risner, broke the tragic news that his law enforcement brother had passed away at 9:52 a.m. on Saturday morning. He was just 40-years-old.

In a tribute to his brother, Billy Risner wrote, “Sgt Nick Risner made the ultimate sacrifice. Nick wouldn’t change anything he done and anyone that knows him knows that!! Scream his name!!!! Sgt James Nicholas Risner!!!!”

Chief Ricky Terry of the Sheffield Police Department said Risner died a hero and even though he is no longer with us, he is continuing to serve humanity since he was an active organ donor.

As Risner’s body was transported to Birmingham Saturday night for an autopsy, he was given a fond farewell by local officers and first responders.

“We mourn alongside the Sheffield Police Department in the loss of Sgt. Nick Risner. Our thoughts and prayers are with his loved ones and the men and women of the Sheffield PD.,” Decatur Police said.

“His sacrifice and the pain it brings is a testament to the heart of service he and other Law Enforcement Officers have for their communities,” Morgan County Sheriff Ron Puckett said.

The suspect accused of shooting Risner was identified as Brian Lansing Martin, WHNT reported. He was being treated for gunshot wounds at Huntsville Hospital.

Martin was sentenced in 2013 to 10 years in prison after pleading guilty to manslaughter. He was arrested in 2011 for killing his father over an owed debt in Tuscumbia. However, he was released from prison in May 2016, according to police.

“The justice system failed not only Sgt. Nick Risner, but his family and everyone who has been affected by his passing,” Chief Terry said. “This incident should have never happened because a coward who should still be in prison was walking the streets.”