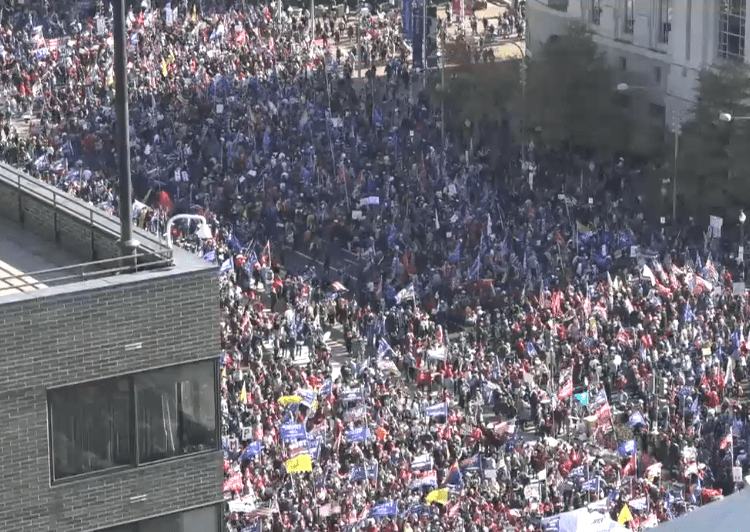 WASHINGTON — Crowds of President Trump supporters are gathering in Washington, D.C., for demonstrations to urge Trump not to concede the presidency to Joe Biden, and they got an early welcome Saturday morning from Trump himself.

Trump and his motorcade drove past the enthusiastic supporters waving Trump flags and holding signs saying “Stop the Fraud” and “Best prez ever.” His supporters chanted “Four More Years!” as Trump drove by gave the crowd a thumbs up, Fox News reported.

Trump hinted on Twitter Friday he may try to attend the rally, but his motorcade Saturday was heading outside of DC to his Virginia golf course.

“Heartwarming to see all of the tremendous support out there, especially the organic Rallies that are springing up all over the Country, including a big one on Saturday in D.C,” Trump tweeted Friday. “I may even try to stop by and say hello.”

The Million MAGA March starts at the Supreme Court and ends at Freedom Plaza.

“The Million Maga March will be the greatest Trump rally in history,” the group tweeted. “We demand a transparent election process, free of fraudulent ballots.”

The Million Maga March will be the greatest Trump rally in history.

We demand a transparent election process, free of fraudulent ballots.

We stand with President Donald J Trump in his fight for freedom against crooked D.C. bureaucrats! #MMM pic.twitter.com/3bn4jd8Ofj

Also in D.C. Saturday, there’s a “March for Trump” demonstration organized through “Women for America First” from the Freedom Plaza to the Supreme Court. An estimated 10,000 people are expected, according to their park permit.