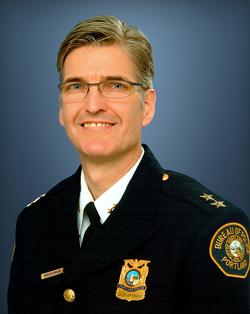 An investigation into Portland’s Police Chief Mike Marshman and his executive assistant stems from a police bureau training, where his lieutenant may have signed the chief in on a log suggesting he had attended, when he had not, according to sources familiar with the inquiry.

Marshman declined to say what led to the investigation. He said he would let the process run its course.

He and his executive assistant Lt. Mike Leasure were placed on paid administrative leave late Friday as the city’s Independent Police Review Division investigates the two.

Oregon Live reports that the recent training was for command staff about the use of the bureau’s Employee Information System,  a computer-based system intended to identify at-risk employees who have a high number of complaints, or a pattern of excessive use of force.

The bureau’s use of a system to identify problems was a part of the city’s settlement agreement with the U.S. Department of Justice after a 2012 investigation found that police used excessive force against people with mental illness.

Chief Mike Marshman has made the following statement:
“The day I was sworn in as Chief, I made a commitment to establishing internal legitimacy and restoring trust, both within our organization and with the community we serve. Part of that commitment is respecting the investigative processes we have in place to ensure accountability at all levels of the organization. These processes apply to me as much as they do to every member of the Bureau. Regardless of rank, everyone should be accountable and it starts with me.  I look forward to the completion of this process and am committed to full transparency so that everyone has access to the facts.  I’m very proud of the work Portland Police Bureau members do every day to keep our community safe and they continue to have my full support.”