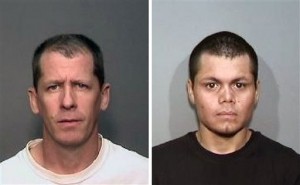 SANTA ANA, Calif. (AP) — Two convicted sex offenders dutifully checked in with police every month and wore their GPS trackers around the clock — the rules of parole that are designed to tip off California authorities if a freed felon backslides.

Yet since last fall, authorities claim, Franc Cano and Steven Dean Gordon have raped and killed at least four women — and probably a fifth — in the seedy prostitution hangouts of Orange County.

It was data from their GPS trackers — along with cellphone records from the victims and other evidence — that helped investigators link them to the killings, police said.

"That was one of the investigative tools we used to put the case together," Anaheim Police Chief Raul Quezada said at a news conference Monday.

If convicted, they could face a minimum sentence of life without parole or the death penalty. Their scheduled arraignment Tuesday was postponed to May 19 and they remained in custody without bail.

A public defender appointed for both men asked a Superior Court judge to have Cano receive a medical exam, citing a range of health problems.

The men had known each other at least since 2012, when they cut off their GPS trackers and, using fake names, fled to Las Vegas, where they stayed at the Circus Circus Hotel & Casino for two weeks before they were rearrested, according to documents filed in U.S. District Court in Nevada.

While out on parole, police believe the men killed three women in Santa Ana last October and November and another woman in Anaheim earlier this year. All had links to prostitution.

Quezada said authorities were confident there is a fifth victim and perhaps more.

Investigators "put a stop to a serial killing that would likely have continued beyond this point," District Attorney Tony Rackauckas said.

The department has contacted other places with missing-persons cases across the country.

She checked into a Costa Mesa hotel but never paid the bill or checked out, and her belongings were found there.

Josephine Monique Vargas, 34, was last seen Oct. 24 after leaving a family birthday party in Santa Ana to go to a store.

Martha Anaya, 28, asked her boyfriend to pick up their 5-year-old daughter so she could work on Nov. 12, then stopped responding to his messages later that night. She had been planning a birthday party for her daughter.

Instead, police considered them missing persons. Investigators searched a canyon, examined the women's cellphone records, alerted hospitals, put the word out on social media and even checked motels the women were known to frequent but were unable to find them.

Then, on March 14, the naked body of Jarrae Nykkole Estepp, 21, was found on a conveyor belt at an Anaheim trash-sorting plant.

It was the key that broke the case, authorities said.

In the weeks before the discovery, Estepp had become a regular on a strip of Beach Boulevard in Anaheim long known for prostitution, police said.

Estepp had "a similar profile to our victims; we were able to … move forward," Rojas said.

Investigators planned to search for the bodies of the three Santa Ana victims, he said.

Cano and Gordon each served time after being convicted in separate cases of lewd and lascivious acts with a child under 14.

Gordon was convicted in 1992 and has a 2002 kidnapping conviction, according to the Orange County district attorney's office. Cano's conviction dates to 2008, prosecutors said.

After their Las Vegas escapade, Cano and Gordon pleaded guilty to failure to register as a sex offender. They were ordered to provide DNA samples and have their computers monitored by federal agents, according to the federal documents, which were first obtained by the Los Angeles Times.

In fact, both men checked in earlier this month, Dunn said.

Share and speak up for justice, law & order...
Tags: GPSInvestigationsNews