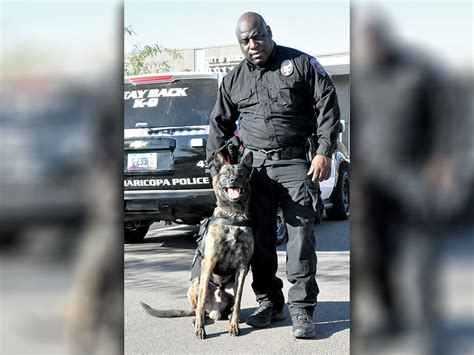 Maricopa, Arizona – After a nine-year old Dutch Shepherd and K-9 partner to Maricopa Officer Craig Curry died last summer,  the officer was give a 20-hour suspension.

Fox News reports that a department investigation determined that K-9 Ike was left inside Officer Craig Curry’s patrol vehicle last summer for an hour and 40 minutes during a meeting at the Maricopa Police headquarters.

Curry told investigators that he came to the station that day to talk to his commander about retiring Ike and the process of getting a new dog for the department.

The investigation of the June 26, 2020 incident determined that K-9 Ike had been left in the car with the engine running and the air conditioning on the third fan speed with the coldest temperature setting.

Upon the officer’s return, he determined that the engine had shut down and Ike had suffered a heatstroke.

The high temperature for that day was around 107 degrees, according to the department’s report.

Curry attempted to restart the car multiple times, but it would not start. He then ran back inside the building to get help, and other officers took immediate action to cool down the dog.

Ike was taken to a local veterinarian for emergency treatment, after which he was transferred to a veterinary emergency hospital in nearby Gilbert.

After Ike’s condition worsened, the decision was made to humanely euthanize Ike on the morning of June 27.

The investigation also found that while Curry had a K9 heat alarm, the pager that would have notified if temperature conditions became dangerous for Ike, was left inside the vehicle.

Curry is a 13-year veteran with the agency and has been a K-9 officer for the past eight years. Ike was his first partner.

Share and speak up for justice, law & order...
Tags: arizonaK-9News