Police Line Up Outside Tacoma Hospital After Officer Dies 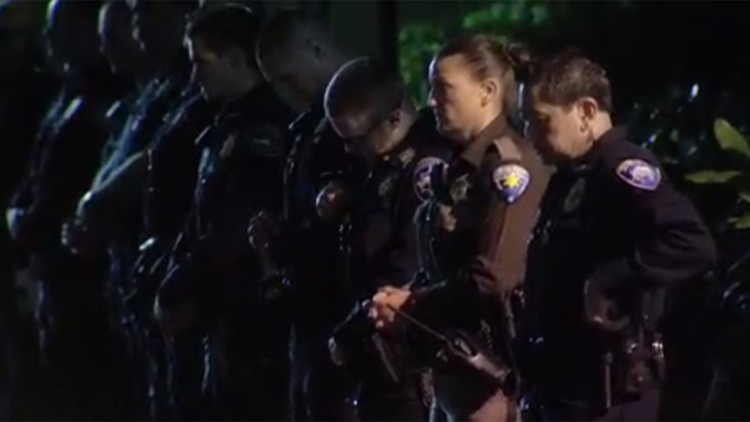 Officers line up outside Tacoma General Hospital to show respect and honor for an officer who died from multiple gunshot wounds.

Police officers from several law enforcement agencies lined up along the street outside Tacoma General Hospital where a fellow officer died from multiple gunshot wounds, while responding to a domestic violence call, according to a news report from KIRO7.

Police believe the suspect may still be barricaded inside the basement of the home, where the domestic violence incident was reported. The officer was shot multiple times inside the home.

The incident began around 5 p.m. (PT). A woman was inside the home with the suspect when multiple gunshots were fired, according to a family member. Two children were also in the home at the time the Tacoma police officer was shot.

“I don’t want to hear anything about black lives matter…”

The woman who was inside the home told reporters: “I don’t want to hear anything about black lives matter, because all lives matter.”

The woman also emphasized the courage and professionalism of the police department, and said, “I want to say the Tacoma Police Department handled this matter with such professionalism… despite one of their own being shot,” she said.

The fallen officer was extracted from the home and taken to Tacoma General Hospital. The unidentified officer underwent surgery, however, regrettably, a police spokeswoman confirmed that the officer had died around 9 p.m. (PT).

Shortly afterwards, police began to line up outside the hospital, and formed a procession to take “him” to the medical examiner, according to a KIRO update on Twitter.

LawOfficer.com is following this tragedy and will provide updates and other information as it becomes available and verified.

Share and speak up for justice, law & order...
Tags: diedhospitalNewsofficershottacoma