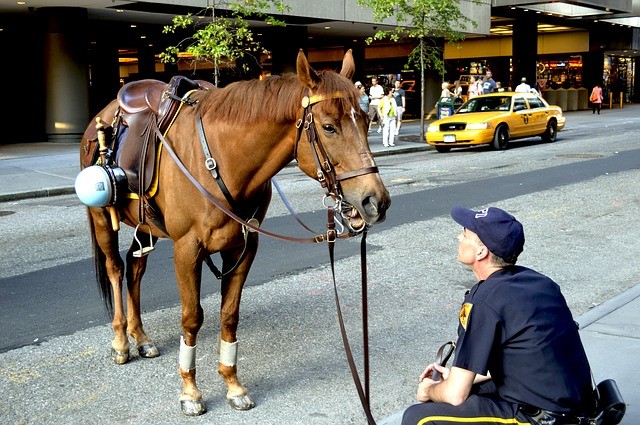 Any law enforcement officer who deals with the public on a regular basis develops a slightly off-kilter sense of humor. Often called “gallows humor,” it manifests itself with things the public might find offensive or distasteful rather than humorous.

We find a lot funny. Usually, it is at someone’s misfortune. We observe something that is purely out of place and we laugh as a defense mechanism. Imagine a five-year-old girl walking down the youth office hallway holding her little brother’s hand. Both terrified after they had been abandoned in an empty apartment for several days. The little brother looking up at his sister as they walked. He is looking for her support, but she’s far too young to be in charge. The Youth officers, your partner and yourself, are near tears at this tragedy. The little boy hadn’t said a word to anyone. The sister led the way. The little boy walked right into the wall-mounted water fountain knocking him down. He didn’t cry, didn’t say a word. He just got up and grabbed her hand and kept walking down the hall.

A tragic scene, right? Sure, but once the first one of us laughed we all burst out laughing at the absurdity. We knew it was wrong and felt sorry for the little guy but not one of us was able to stop laughing. It was evil and dark, and we knew it, but we still laughed. The little boy’s pratfall was so unexpected and out of place that we couldn’t hold it in.

We ran into a lot of hot cars getting stripped in the alley calls. The bad guys found a long alley with T-alleys at each end. Ten minutes and some cinder blocks and everything salvageable on that hot car was gone. Indy pit crews could learn from them. When we got the call, we would enter the alley but since they were half a block down in the middle of the alley they would escape through the yards on foot in every direction.

My partner and I decided to hit the street mid-block and let someone else flush the bad guys out. We got there before anyone and hid out on the street waiting. Finally, a responding car hit the alley and we heard running in the gangway and yard coming our way. My partner grabbed one coming out between two buildings and I grabbed one as he hurtled over the front fence. He hit the ground and I cuffed him faster than a cowboy could rope a steer.

The guy I grabbed got so scared he defecated in his pants. He sat in jail and went to court the next morning in those clothes. Now that was funny.

We had the old Mars emergency lights on the rooftop. If you taped a soda straw to the end of the bar you could slide and bottle rocket in. You then waited until another team of officers walked out to their car from a call or meal and using a cigarette you lit the bottle rocket fuse. You then tried to shoot them down like it was an airplane dog fight.

In the winter, finding a pristine parking lot covered with a fresh blanket of snow you laughed like a little school kid as you did donuts. Anyone asked, you were practicing vehicle control under adverse weather conditions.

One Christmas my son and another officer’s son each got radio-controlled cars. We brought them to work to race each other in the roll call room. Well, the watch commander and field lieutenant caught us, and they played with them until all the batteries were exhausted. We all laughed.

That same field lieutenant stepped out one day to see what the prisoner in the holding cell at the desk was screaming about. There was nothing wrong with him other than it was not how he planned on spending the night. The Lt. told the man to be quiet. The man responded with a very impolite comment. The Lt. repeated the order to shut up or he promised to shoot the man. Well, the man was only spurred on by the Lt.’s response. The Lt. returned to the office and moments later he returned with a small revolver, aimed at the man in the holding cell until he had the man’s full attention and then he fired the gun three times.

Three loud reports sounded from the blanks in the starter pistol. The officers standing around went about their business as usual. The citizens standing at the desk commented that now the idiot might keep quiet. We laughed later, and very hard.

A tact team had made an arrest for possession. The arrestee had been riding a motor-scooter. The tact guys brought scooter into the station so they could see the VIN and other identifiers better in the light. One of the district sergeants seeing this decided to take the bike for a spin around the desk. This district desk was an island. The sergeant rode around the desk faster and faster until he hit a slick spot and went down. He was fine but gas spilled out and covered the floor. He cleaned it up, but the smell lasted for a day or two. He had just finished cleaning when the deputy chief walked in to say hello.

Finally, I want to remember an officer who had a great way of getting back at anyone on the desk who gave him a hard time. He would walk over pick up the narcotics safe and set it down on the desk in front of the officer who was giving him a hard time. Not much until you realize the safe was steel and weighed at least 150 lbs. He then left the building leaving the offending officer to get the safe moved back to the floor.

I would love to hear some of the things you laughed at. Now keep in mind I’m retired seven years and the officers I’m referring to have either retired or died. Don’t go posting anything that might get you in trouble, no matter how funny it is.

P.S. If you like my writing and would like to read more you can find links to all my articles and my books at my website www.bobweisskopf.com.