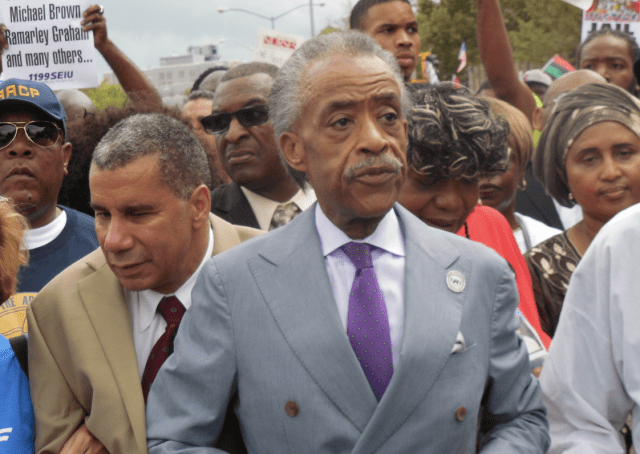 A police critic who actively takes shots as the law enforcement profession whenever possible, might otherwise be known as the million-dollar sinister-minister due to tax filings that became known.

Rev. Al Sharpton raked in $1,046,948 from his own charity last year, according to National Action Network’s latest tax filings obtained by the New York Post.

Astonishingly, the sinister-minister’s mammon really raised eyebrows last year when NAN’s filing revealed he had sold the rights to his life story to his own charity for $531,000. The organization contended the purchase would provide a revenue stream because it could turn around and sell the rights. As a result, it appears the business of being a police critic has been lucrative for Sharpton.

NAN at the time said an unnamed “executive committee independently approved” the deal, leading one expert to question how the independence was achieved.

“In this case, it’s really difficult because of his role in the organization and just because of his overall influence,” Linda Sugin, a Fordham University Law School professor and associate dean said at the time.

Sharpton said Saturday that NAN did sell the rights for a documentary that filmed the night of his 65th birthday gala at the New York Public Library, an event hosted by Samuel L. Jackson and Spike Lee. But he said he hadn’t received any cash yet.

“They have already made a profit on that off the birthday,” Sharpton said.

NAN took in $7.3 million in donations last year, up $1 million from the previous year. NAN paid off years of accumulated tax debt in 2014.

The Harlem-based nonprofit — which Sharpton controls as president and CEO — said the extra cash was to make up for the years from 2004 to 2017 when the police critic didn’t get his full pay.

NAN said it hired an executive compensation firm that determined Sharpton was owed $1.252 million — but he was generously willing to take $500,000 less.

Sharpton and the nonprofit’s board also agreed “he has now been fully compensated for all the years he was underpaid and received no bonus,” the NAN statement said.

The sharp-dressing, silver-tongued sinister-minister defended the windfall before taking the stage for his weekly rally at NAN’s House of Justice in Harlem, an event where attendees throw cash in the collection bucket at Sharpton’s behest.

“Fifteen years, you are talking about since 2004 when I came back after running for president,” he said. “For anybody else it would be laughable.”

He said he also deserved the 2018 raise.

“It’s a six-day-a-week job and several hours a day and when [the compensation firm] compared it to other companies, other nonprofits, that’s the salary that they would get,” he said.

The firebrand activist and MSNBC host was not exactly earning minimum wage in recent years. The last year he went without a salary was 2008, and he has made well into the six figures every year since, tax documents show.

He certainly wasn’t coveting his neighbor’s paycheck in 2017, when his NAN salary came to $244,661, or the year before, when he was paid $250,000 plus a $437,555 bonus. NAN justified the bonus at the time saying it was designed to make up for a lack of full compensation, including no retirement or benefits packages over the years.

The nonprofit also noted in 2016 that Sharpton’s average yearly pay of $283,543 from 2007 through 2016 fell within the competitive range of those who held similar positions, Fox News reported. However, the benchmarks were not provided.

Sharpton has been paying down millions in his own personal federal and state tax liens. In June, he finally paid off his personal tax debt to the state, which last year stood at $95,031.21. He still owes $698,470.99 in back taxes for three of his companies, according to the state Tax Department.