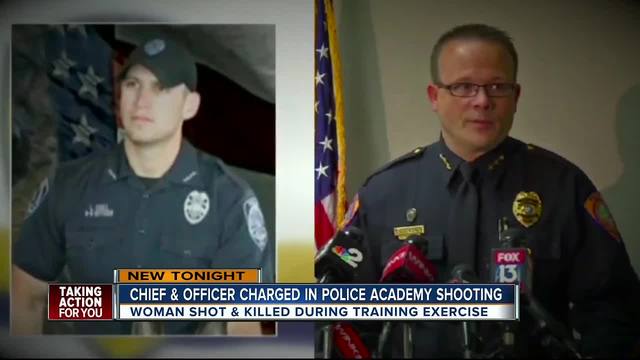 The officer who is believed to have accidentally shot and killed a retired librarian during a citizens academy ‘shoot, don’t shoot‘ exercise has been charged with manslaughter, according to arresting documents.

The charges come after the state attorney’s review of an investigation into the shooting death of Mary Knowlton, which was conducted by the Florida Department of Law Enforcement.

After the shooting in August, Lewis called the 73-year-old woman’s death a “horrific accident.”

The incident happened during a roll-playing exercise designed to give citizens an idea of the life-and-death situations officers face. Mary Knowlton volunteered to play the role of a police officer during the demonstration, while Coel played the bad guy. His gun should have been loaded with blanks, but Knowlton was hit with a live round. She died shortly afterward at the hospital.

The Citizens Academy is designed to teach local civics to civilians who apply for the eight-week course, according to Punta Gorda’s website.

Chief Tom Lewis contacted the Florida Department of Law Enforcement to investigate the events that surrounded the incident. Today, he was arrested following that same investigation.