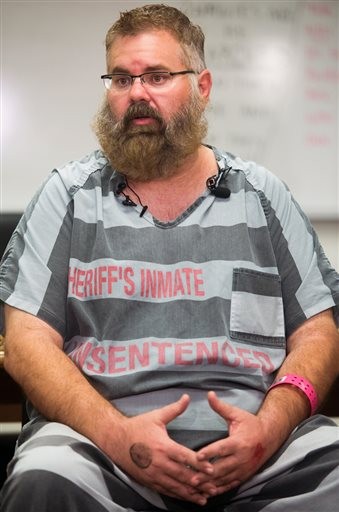 PHOENIX (AP) — Authorities say they are investigating whether a group of armed bounty hunters who mistakenly swarmed the Phoenix police chief's home were the victims of a prank.

It will take time to probe the social media tip that led 11 people to believe a fugitive was hiding in Chief Joe Yahner's house, Phoenix police spokesman Trent Crump said. The police are waiting to serve subpoenas, and the investigation could take weeks, Crump said.

Officers arrested Brent Farley, the owner of a local bond-recovery company, after the Tuesday night incident. Farley, 43, is facing one count each of disorderly conduct and criminal trespassing.

Brent Farley speaks to the media during a news conference held at Durango Jail in Phoenix, Thursday, Aug. 6, 2015. Authorities said Thursday they are investigating whether a group of armed bounty hunters who mistakenly swarmed the Phoenix police chief's home were the victims of a prank. Farley, 43, is facing one count each of disorderly conduct and criminal trespassing. (Isaac Hale/The Arizona Republic via AP)

Police officers responded to Yahner's home on Tuesday night and found the residence surrounded by armed employees of two bond-recovery companies, according to investigators. Several vehicles were parked on the property with their lights on. At least one armed bondsman allegedly banged on Yahner's door and got into a verbal confrontation with the chief, demanding that Yahner come out, investigators said.

The men also had an 11-year-old girl with them. Police are not identifying her or her relationship to the group, but child welfare officials have been notified, Crump said.

The Arizona Department of Insurance, which keeps a registry of licensed bail bond agents and registered bail recovery agents in the state, did not have Farley's name on file.

"We have no record of a Brent Farley ever applying for a registration or license," department spokesman Andrew Carlson said. "That name is not currently listed in our registry of bail recovery agents."

A message left at a phone number listed for Farley was not immediately returned Thursday. James Farley, the suspect's brother, declined to comment when reached by phone.

Prospective bounty hunters, or bail recovery agents, must qualify for a registration, according to the Department of Insurance. The requirements include being at least 18 years old, obtaining a fingerprint card and passing a background check.

Farley pleaded guilty to a reduced charge in a case of theft and in a case of sexual conduct with a minor in the 1990s, Maricopa County court records indicated. Police, however, said they were not yet aware of anything precluding Farley from owning a firearm.

Joe Burns, the former president of the Arizona Bail Bondsmen Association, said the incident underscores the need for Arizona to require training for bounty hunters. Anyone can obtain a registration and "walk out, go to the local gun shop, buy a gun, handcuffs, and 'Now I'm a bounty hunter,' " Burns said.

"Basically, it's the Wild West," Burns said. "That's what you had at the police chief's house."