Pennsylvania S.I.T.E. security agents are on duty, wearing Kevlar vests and carrying sidearms as well as AR-15 rifles or shotguns. 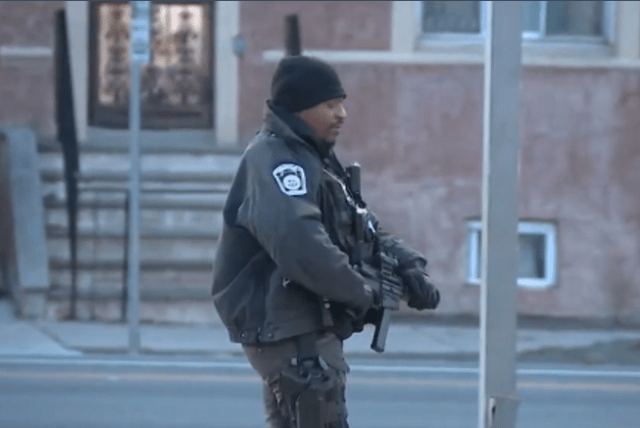 PHILDADELPHIA – A Philadelphia gas station owner is fed up with rampant crime in the city, so he recently hired security guards donning Kevlar vests and equipped with sidearms and AR-15s or shotguns to protect his business.

Neil Patel is the operator of Karco gas station at Broad and Clearfield streets in North Philadelphia. He recruited Pennsylvania S.I.T.E Agents to keep his establishment and its customers safe since they have been repeatedly victimized, FOX 29 Philadelphia reported.

“They are forcing us to hire the security, high-level security, state level,” Patel said when speaking to the news outlet. “We are tired of this nonsense; robbery, drug trafficking, hanging around, gangs.”

Gas station owner Neil Patel of North Philadelphia said he has been forced to hire armed security to protect his establishment from the city’s rampant crime. (Screenshot Fox 29)

Pennsylvania S.I.T.E. (Strategic Intervention Tactical Enforcement) specializes in executive protection with private armed agents. They are described as “a special and unique group of trained professionals to protect you and your love ones and business from crime and criminal elements.”

Patel said he was finally driven to hire armed security after young criminals recently vandalized his business and stole its ATM. His vehicle has also been damaged by hoodlums in the area.

Security guards are outfitted in Kevlar vests and well-trained in the use of weapons and laws that are relevant to their job function. (Screenshot Fox 29)

“We wear Kevlar, we are trained, my guards go to training every other week, they’re proficient with [their guns] and with their Taser, they know the law,” Chief Andre Boyer said.

The owner said crime at his gas station has stopped since he deployed armed guards to protect it. (Screenshot Fox 29)

A majority of the local residents and neighbors approve of the move, with 65% in favor and 35% opposed, according to an ongoing poll by FOX 29.

“I listen to them, but according to some people, violent people, they carry the guns, they’re not afraid of them? This is the protection for the neighborhood and the customers,” said Patel.

Local resident Korrie Berry said she supports the presence of armed security since the gas station is frequently victimized.

“If you’re trying to get gas and you live in a bad area, and the only place is here and they’re getting robbed all the time, I mean, I support the owner,” she said.

Another resident was not in favor, saying, “Guns like that should be on the battlefield.”

Sadly, he’s overlooking the reality that elements of battle have become commonplace on inner-city streets, which have forced business owners like Patel to defend their personal safety and property interests.

Since hiring and deploying armed security guards, Patel said the crimes and loitering has no longer been a problem, FOX reported.