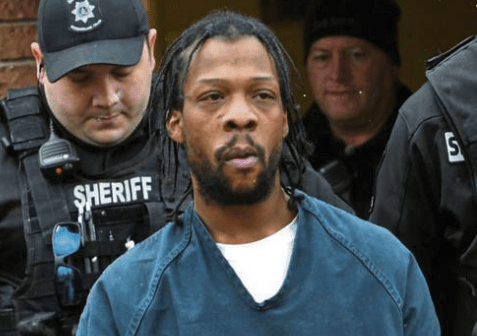 Sentencing proceedings are scheduled to begin at 10 a.m. Wednesday. The same jury that found him guilty will be tasked with deciding whether Holt spends the rest of his life in prison or is sentenced to death.

As the verdict was read Tuesday afternoon, several in the courtroom, including Shaw’s parents and brother and law enforcement officers, could be seen crying.

Tyler Singer, who met Shaw during an instructional camp for high school kickers, said Tuesday upon learning about the verdict that he was happy for Shaw’s family.

“I have seen them at fundraisers and memorials for Brian,” said Singer, 27, a doctoral student at Kent State University in Ohio. “I know they needed some type of closure. I’m glad they got it.”

#NEW: 1st jury question during deliberation: The jury came back into the courtroom and requested to see the home surveillance video of the shooting of Officer Shaw one more time. @KDKA pic.twitter.com/3c53llDWNT

Former New Kensington police Chief Jim Klein, who was heading the city’s department when Shaw was killed, said a lot of emotions went through his mind as the jury read its four guilty verdicts.

“A verdict like this doesn’t bring Brian back, but it gives a sense of relief in knowing the person that did this to him is going to be in his rightful place and not out on the street where he can hurt someone else,” Klein said.

Knowing what went into the investigation, Klein said he never had any doubt Holt was the killer. He recalled a press conference he held in the wake of Shaw’s death, in which he vowed that the person who did it would be held accountable, reported triblive.com.

Looking forward to sentencing, Klein said, “I want him to be held accountable.”

Holt showed no emotion as he was led out of the courtroom in handcuffs.

“We all prayed that justice would be swift and justice would prevail,” Frazer police Chief Terry Kuhns said at the courthouse Tuesday. “Today, justice prevailed.”

Shaw had worked part-time for the Frazer department. Kuhns said he was surprised at the speed of the verdict and grateful for the closure it will bring for Shaw’s family.

Peck rested the prosecution’s case against Holt without calling any further witnesses on Tuesday, the sixth day of the trial. Klein, the last witness to testify on Friday, read the oath of office that Shaw took four and a half months before he was shot and killed following the Leishman Avenue traffic stop on Nov. 17, 2017.

“The evidence only points in one direction and that’s the defendant,” Peck said during his closing arguments.

Holt chose not to testify Tuesday, and his attorneys called no witnesses.

“We felt it was in the best interest of our client to not put on any evidence, to hold the commonwealth to their burden and that didn’t go so well,” Tim Dawson, Holt’s lead court-appointed defense attorney, said.

In his closing, Dawson questioned if there had been a rush to judgment in charging Holt and if there could have been another shooter as officers sought justice in the death of one of their own.

Dawson said he thought the verdict was quick.

“It was a highly emotional case and I hope the Shaw family can find some closure,” Dawson said.

Dawson said the defense will call up to 10 witnesses during the penalty phase of the trial, in which they will seek a sentence of life without parole.

Holt could testify to directly ask jurors to spare his life, Dawson said.

Holt maintained his innocence throughout the trial. Dawson noted that Holt had not confessed to committing the crime, there were no eyewitnesses, and the murder weapon was never found. There was also no DNA or fingerprints placing him at the scene.

According to the report, Holt hit Shaw with three of six rounds. Two bullets hit Shaw in the front and back of his left shoulder, causing fatal bleeding; the third impacted the back of his body armor. The other three hit houses.

Shaw never fired his own weapon.