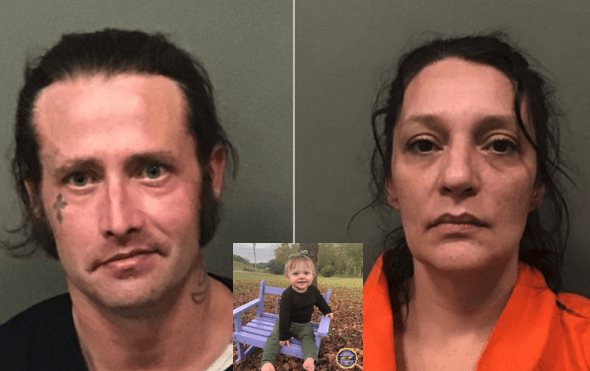 SULLIVAN COUNTY, Tenn. – Investigators in Tennessee looking into the disappearance of a 15-month-old girl have arrested two people in connection to the case, according to reports.

William McCloud and Angela Boswell were arrested Friday in North Carolina on one count of possession of stolen property, reported Fox News.

Both McCloud and Boswell are residents of Tennessee, and the Wilkes County Sheriff’s Office says they were also wanted on outstanding warrants. Documents show Boswell had an active warrant for violation of probation. McCloud reportedly had a warrant for theft over $2,500, WCYB reported.

According to law enforcement authorities, the pair was found inside a vehicle linked to the disappearance of Evelyn Boswell, who was last seen on Dec. 26. The relationship between the suspects and the child was not immediately known. As of now, they have not been charged with her disappearance.

Despite being last seen almost two months ago, Evelyn was not reported missing until Feb. 18, according to the Tennessee Bureau of Investigation.

On Friday, investigators released images of a BMW and said the individuals with that vehicle “are believed to have information” pertaining to Evelyn’s whereabouts.

The girl’s mother, Megan Boswell, told police that her daughter was with someone she trusted to watch her while she was at work, but she declined to name that person, WCYB reported.

UPDATE: The gray BMW has been located in Wilkes County, NC, along with the individuals authorities were hoping to speak with. The investigation remains ongoing.

Police said the mother is cooperating with the investigation but her information has been inconsistent, WCYB reported.

“The reason I didn’t report it or anything was I knew the person who had her, and I didn’t want them to run away with her,” Boswell previously told the station. “And as soon as they thought anything was going on, they just kinda vanished. So I’m just kinda worried, you know, about where they are at. What they’re doing with her at this point in time.”

Evelyn was still reported missing at the time of Boswell and McCloud’s arrests.

Although the pair have not been formally charged with a crime related to the missing girl, they are being held without bond in North Carolina. As a result, they are scheduled to appear in court on Monday.