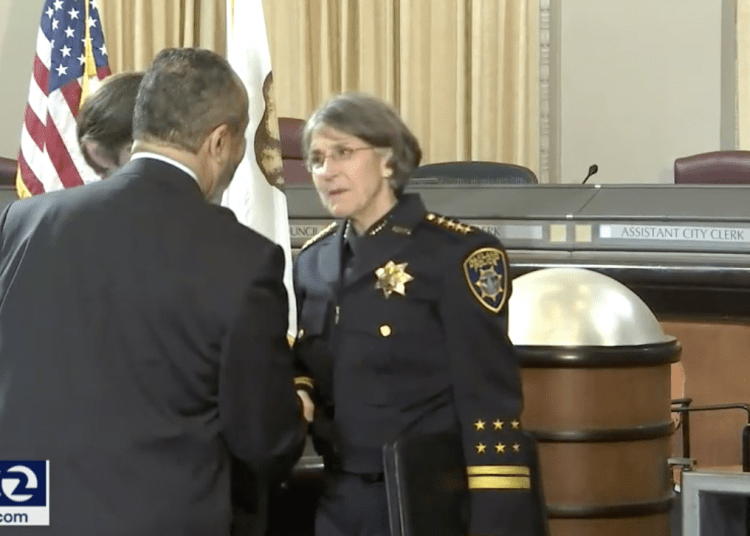 OAKLAND, Calif. – Four days after an independent commission fired Oakland’s police chief, Anne Kirkpatrick spoke publicly for the first time on Monday. She says that her public termination is partially in retaliation for failing to do favors for a member of the very board that dismissed her.

Kirkpatrick said she believes she lost her job because she refused to reimburse commissioner Ginale Harris for towing fees. According an internal, confidential memo from 2018 reviewed by KTVU, the chief told the city that Harris “demanded” that she receive reimbursement for towing fees. Regardless of the demand, the chief “refused to provide any special treatment” to Harris.

The memo goes on to say that Kirkpatrick feared “retaliation” for the decision. The memo was authored by a private investigator and sent to Oakland’s Human Resourses department. It does not outline the exact dates of the towing or how much money Harris allegedly owed. Moreover, the memo is a summary of this alleged interaction; there is no hard evidence, like an email to the chief, that Harris supposedly wrote. It is also unclear why this investigation into Harris was launched, though the memo mentioned Harris had been rude to city staff, including police officers, who felt “disrespected and abused,” at a meeting that year.

Harris has not responded to request for comment on the allegations, KTVU reported.

Kirkpatrick is now represented by high-profile public relations strategist, Sam Singer, and is pushing back against her termination. She said she may consider suing the city over her firing and is considering all her “legal options.” Kirkpatrick also called for the Department of Justice to investigate the commissioners who fired her, as well as the federally appointed monitor tasked with overseeing OPD reforms.

On a personal level, Kirkpatrick said that her dismissal was more than humiliating for a career veteran of her stature.

“I’m embarrassed. Those headlines went national,” she said. “It’s painful to me. It’s not how I would like to end 38 years.”

Kirkpatrick said she wants the public to know that the city “hired a woman of integrity.”

The city’s police commission flexed their power and fired Kirkpatrick, who became the city’s first female chief of police three years ago, in a special meeting last Thursday night.

The decision was made unanimously by the police commission and Oakland Mayor Libby Schaaf during a closed session.

During a press conference held by Schaaf, the decision to terminate Kirkpatrick clearly rested with the police commission, and she sided with those holding power. She said it was a personnel matter and would not provide further explanation. Reporters seemed bewildered at a lack of explanation since Kirkpatrick was hired three years prior amid an organization that had disastrous leadership in the years leading up to her hire.

Kirkpatrick took over as chief of police in February 2017, succeeding former Chief Sean Whent, the fourth chief of the department since 2009, and two interim chiefs who served briefly after him.

At the time, she was tasked with bringing reform and accountability to an embattled department that had been under federal oversight for more than a decade. The agency was also reeling from a sexual misconduct scandal in which officers were charged with having sex with the teenage daughter of a police dispatcher who was underage and giving her confidential police information.

There was no single reason for Kirkpatrick’s termination and no one has accused her of any crimes or corruption. But the commission, which has been meeting for the last two years, ultimately felt that Kirkpatrick did not represent the progressive police reforms they desired, KTVU reported.

The commission is made up of seven citizens and is the most powerful civilian police oversight body in the United States with rare abilities to fire the chief.

Kirkpatrick says the mayor did a flipflop on her assessment of performance, which came as a surprise.

“I think well of Mayor Schaaf. I’m really surprised and quite disappointed. Three weeks ago she asked me to go to Washington, D.C., and she’s introducing me as her fabulous police chief,” she said. “Two weeks ago, she’s saying in front of staff members that she was going to fight for me. I believed her.”

The Oakland police union opposed the political decision and expressed disappointment over the firing.

“Chief Anne Kirkpatrick was a well-respected leader of the Oakland Police Department and was making significant progress in bringing stability to OPD,” Oakland Police Officers’ Association President Barry Donelan said in a statement. “But fighting for Oakland’s residents and Police Officers alike does not endear you to Oakland’s unelected Police Commissioners and our Mayor.”

Chicago mayor uses privilege to exempt herself from BLM wrath