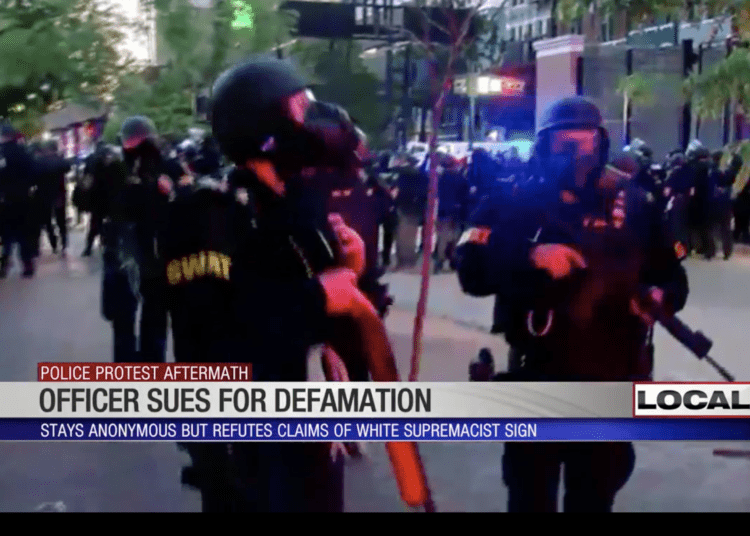 Several citizens accused the officer of being associated with white supremacy or of being racist after spotting a video and picture of him allegedly flashing the “ok” sign at a City Council meeting in June – a meeting held to address concerns by those in the Black Lives Matter Movement, WKRC reported.

They posted about it on Facebook and other online forums, leading the officer to file his lawsuit.

The officer’s lawyers were able to get the records sealed and the officer’s name replaced by a pseudonym (the court hearings are still open to the public).

They took that step after arguing that someone online wrote they knew where the officer lived – information gained from public sources such as the county auditor’s website.

Erik Laursen is the attorney representing Julie Niesen, who originally spotted the picture and video of the officer at the City Council meeting. She also looked up and posted details from the officer’s performance record.

“I wrote it because I believe that there is a problem with police and these problems need to be exposed,” Niesen said.

She said the lawsuit threatens her First Amendment rights and is “bullying and intimidation.”

Hamilton County Common Pleas Judge Megan Shanahan did not force the defendants to remove the original posts or prohibit them from posting their opinions in the future as requested by the officers’ lawyers.

She cited the First Amendment in her ruling Friday, much to the relief of Niesen and her lawyer Laursen.

The other defendants in the case and their lawyers declined comment.

The officers’ lawyers Zachary Gottesman and Robert Thumann declined an interview but wrote in a statement:

“This country is on a dangerous path. The antifa/defund/occupy/BLM terrorists are attacking our police. Opportunistic and/or cowardly politicians refuse to condemn these terrorists and thereby tacitly approve of their tactics. At the same time, the left’s media lapdogs refuse to objectively report the truth that the problem is not with the police, but the criminal subclass created by social programs that destroy the bedrock, familial structure of this country. The combined effect of these factors is that police are becoming more risk-averse and that endangers us all.

“The Defendants in this case thought they could threaten and attack this police officer without consequences. They were wrong. Judge Shanahan made the right decision to protect this officer and his family and preserve their privacy. Her ruling will prohibit the dissemination of the officer’s personal identifying information.

“We have the highest respect for Judge Shanahan and the difficult job she has, especially with respect to next hearing which will further address the vile, unjustified smears made against this police officer. We are confident we will be able to prove what these Defendants did is not entitled to 1st Amendment protection.”

The president of Cincinnati’s branch of the Fraternal Order of Police told WKRC the local police union is not directly involved in the lawsuit. But he strongly encourages officers to stand up for themselves in court if they feel wronged.

“We certainly are not at war,” he said. “We are doing everything we can to serve the community. But there are people who are at war with us. And we do need to defend ourselves in the legal by the legal means afforded to everybody else.

Law Officer found at least one post in question, which is still present on Facebook as of Friday, July 31. We have not linked to it since it identifies the officer.

“At yesterday’s City Council meeting, several speakers indicated that a police officer, later identified as (name withheld for his safety), was flashing the “ok sign”, which is a white supremacist symbol.”

She then proceeds to highlight an OIS from 2012, which was justified as well as several personnel complaints that were cleared as unfounded or exonerated. Continuing, she mentions the “white supremacy sign” (i.e. “ok” gesture) as if its universally accepted as a racists symbol.

Perhaps it’s a sign of “white supremacy” in the minds of woke or over the top p/c individuals. But to normal thinking people, the “ok” finger symbol means … “ok.”

Finally, Niesen dissects and psychoanalyzes memes and posts from the officer’s FB page as if she is able to get inside his head and thoroughly interpret the true meaning of each one.

Now she’ll get a chance to explain her actions in civil court.