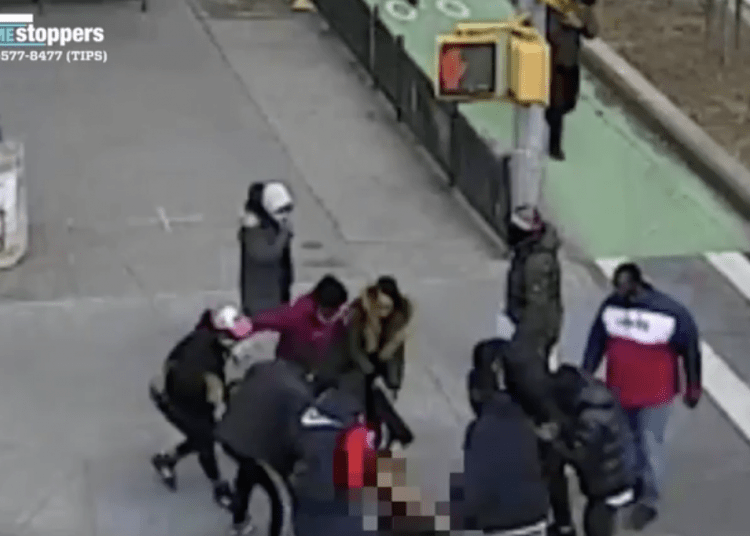 A man is beaten and stripped in New York's Chinatown. (NYPD)

NEW YORK — A 26-year-old man had just gotten off a bus from Atlanta when he was attacked by a group of about a dozen suspects who beat him, cut him several times and stole his clothes, including his underwear, police disclosed on Sunday.

The group of suspects included males and females. They began assaulting the victim around 11:30 a.m. Friday near Canal and Allen streets in Manhattan, cutting him with an unknown object, according to police.

NYPD released video of the suspects and are seeking witnesses. The attackers took the man’s cell phone and removed his pants, underwear and shoes, New York Post reported.

“They attacked him as soon as he got off the bus from Atlanta,” a police source said.

The man, who is from Brooklyn, suffered four slash wounds to his torso, two to his head and one to his hand after getting off the bus from the Georgia, according to law enforcement authorities. The group of suspects fled in three vehicles – a van and two sedans.

Law Officer is the only major law enforcement publication and website owned and operated by law enforcement. This unique facet makes Law Officer much more than just a publishing company but is a true advocate for the profession.
Share and speak up for justice, law & order...
Tags: beatingBrooklyn manChinatownnypdstripping