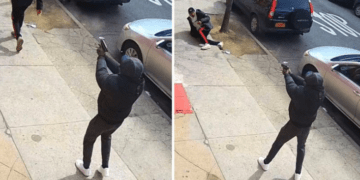 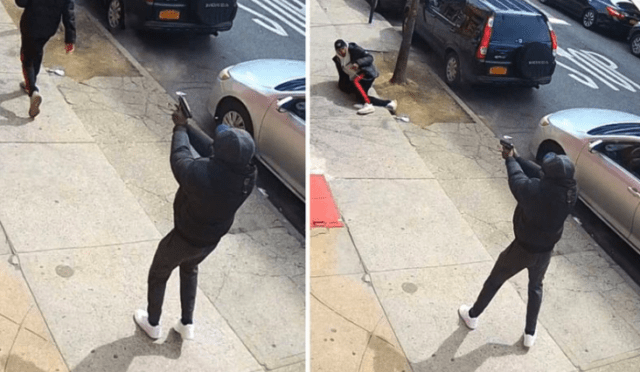 Surveillance video of the shooting shows the victim was ambushed from behind. (Photos via Daily News)

NEW YORK — A reported Gorilla Stone Bloods gang member in New York City was involved in three drive-by shootings just weeks after he was released without bail following an attempted murder arrest, according to reports.

Darrius Sutton, 23, was previously taken into custody in connection with a shooting on May 16 in Brooklyn’s East New York, where Justice Department officials said he shot and seriously injured a man, according to the New York Daily News. As a result, he was charged with attempted murder, assault with intent to cause injury and criminal possession of a weapon.

However, the man was released without bail after the lone witness waffled and withdrew a statement, according to the report.

“At the time of arraignment the sole eyewitness had recanted so we did not have sufficient evidence to keep the defendant in custody,” a spokesperson for the Brooklyn District Attorney’s Office told the news organization. “The investigation is continuing and we hope other witnesses come forward.”

But federal prosecutors say that Sutton — who they claim is a member of the Gorilla Stone subset of the Bloods — is responsible for several other shootings in Brooklyn over the past year that have injured seven, including a macabre April attack in which he allegedly snuck up behind a rival gang member and shot the unsuspecting man three times in the back, nearly killing him.

A Brooklyn gang member was released without bail on an attempted murder charge in May.

Since then, he took part in three more shootings, feds say.https://t.co/XzCHm8pU9U

“As the video of the shooting and the photographs … make clear, it was entirely fortuitous that the defendant was unsuccessful in his attempt to murder the victim,” prosecutors wrote in a filing last Wednesday, the same day Sutton was arrested by federal agents.

He is now in federal custody at Brooklyn Metropolitan Detention Center after a magistrate judge ordered him held last week.

The feds have charged Sutton as a felon in possession of a weapon for the April 20 shooting. He has an exposure of up to 10 years in prison in the case.

Besides the April shooting, Sutton is believed to have taken part in five others since August 2019, including the May attempted murder, according to federal prosecutors.

After getting released without bail in the May shooting, Sutton took part in a series of drive-by shootings on July 13 and 14, the feds said. Sutton’s fingerprints were lifted from the door of one of the cars used in the crimes and he was also caught on surveillance footage firing a weapon in one of the incidents, prosecutors said.

“The defendant’s violent spree over the last year has left at least seven individuals with gunshot wounds,” federal prosecutors wrote. “The defendant is extraordinarily violent by any measure and he has shown total disregard for the lives of others.”

Sutton’s lawyer declined to comment on the federal case, according to the Daily News.

Sutton also spent two years in prison after pleading guilty to assaulting a woman and breaking her teeth in 2014. The feds also claim that based on review of Sutton’s Facebook activity, they were able to determine that he was physically abusing his current girlfriend.

He appeared in the music video for a rap song titled “Crime Rate” by a Brooklyn rapper called BK Eaz about how their gang was “boosting the crime rate” in New York City, the feds say. The song opens with a TV reporter speaking about a surge in crime in 2020.

Two minutes into the song, one of the rappers refers to Sutton, prosecutors allege, when he says, “Meecho say get him, I got him.”

Sutton goes by the alias “Blizz Meecho,” the feds allege.