Justice Department will not charge police with Eric Garner’s death 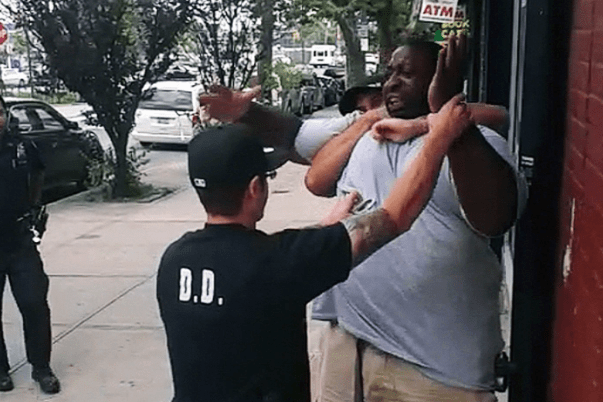 2014 NYPD confrontation with Eric Garner that led to his death. (File photo)

NEW YORK – The Justice Department will not bring federal charges against any police officers involved in the death of Eric Garner, a 43-year-old black man whose recorded takedown in New York in 2014 helped coin a rallying cry for those concerned about law enforcement’s treatment of minorities, two people familiar with the matter said, according to The Washington Post.

Prosecutors, including Richard P. Donoghue, the U.S. attorney in Brooklyn, delivered the news to Garner’s family. The development was first reported by the New York Times. The people familiar with the decision spoke on the condition of anonymity because of the matter’s sensitivity.

The case followed a lengthy path through the Justice Department, staying alive as three attorneys general — Eric Holder, Loretta E. Lynch and Jeff Sessions — finished their terms without bringing it to a conclusion.

Al Sharpton, who appeared with Garner’s family at a news conference after the meeting with prosecutors, said they were told Attorney General William P. Barr made the decision. The meeting came just a day before the five-year anniversary of Garner’s death, after which the statute of limitations would have prevented prosecutors from bringing certain charges.

From the outset, the Justice Department’s Civil Rights Division argued that charges were warranted, especially for New York City Police Officer Daniel Pantaleo, who was caught on video wrapping his arm around Garner’s neck during the takedown.

But the FBI and federal prosecutors in New York were wary of bringing a case, and some of their skepticism was documented in internal records, potentially complicating a future trial, current and former law enforcement officials said.

The tension became so severe that the Justice Department removed New York FBI agents from the team of investigators. Late in Lynch’s term as attorney general, then Civil Rights Division head Vanita Gupta successfully pushed for her prosecutors to take the lead on the case, and Lynch authorized them to move forward, current and former officials said. But they found some of the previous investigation lacking and knew their work would have to continue into the Trump administration, the officials said, The Washington Post reported.

The official said that a key element in reviewing Garner’s case was scrutiny of the video. Senior officials, including Barr, ultimately were swayed by the Brooklyn prosecutors and concluded there was insufficient evidence to prove the police officer acted willfully, officials said.

The senior Justice Department official said that the chokehold lasted about seven seconds — not enough time, in the minds of some prosecutors, to establish that the officers struggling with Garner intended to cause him harm.

The prosecutors decided they could not prove beyond a reasonable doubt that what Pantaleo did wasn’t a mistake, or poor judgment that did not rise to the level of a conscious decision to choke Garner, the senior official said.

Substantiating federal civil rights charges against police officers for on-the-job incidents can be challenging. Prosecutors must present evidence that speaks to an officer’s intent, and it is not enough for them merely to show that an officer acted negligently or recklessly. In Garner’s case, too, a Staten Island grand jury also declined to bring charges.

Garner drew the attention of police for selling loose cigarettes. After he was wrestled to the ground, his gasps of “I can’t breathe” became a rallying cry for those advocating police reform.

Pantaleo was put on desk duty and this summer went through an internal administrative process to determine what discipline he should face. Commissioner James P. O’Neill is expected to make a decision on Pantaleo’s future with the police department soon.

“De Blasio. What’s up?” Emerald Garner, one of Eric Garner’s daughters, said. “When are you going to fire this officer?”

In a statement, the mayor did not directly address Pantaleo’s employment, but criticized federal authorities.

“Years ago, we put our faith in the federal government to act,” de Blasio said. “We won’t make that mistake again.”

Jonathan Moore, an attorney for the Garner family, said every presidential candidate should be pressed to take a position on the case, and noted that the statute of limitations had not expired to charge a civil rights violation resulting in a death.

Stuart London, an attorney for Pantaleo, said he preferred to wait for an official announcement before commenting. The city of New York reached a civil settlement with Garner’s family in 2015 for $5.9 million.