'I hope those individuals who will judge those officers do so through a lens of what all of our officers experienced while protecting Dallas in one of the most chaotic times in its history,' Dallas chief says 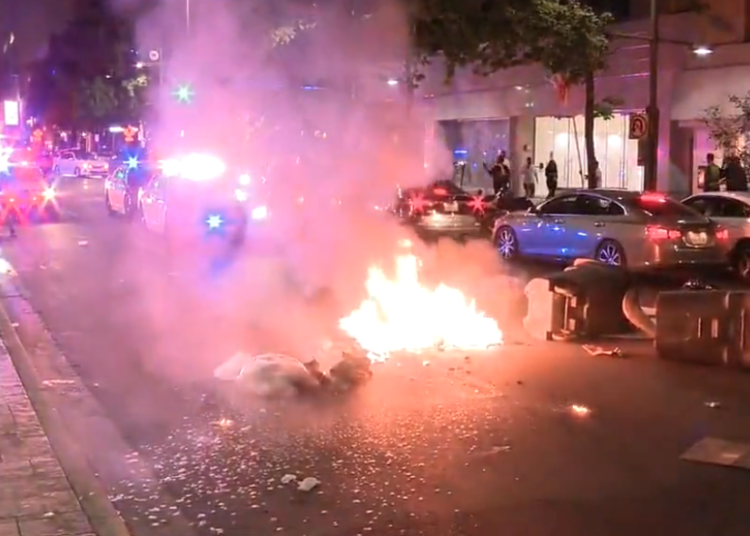 “After nearly two years of investigation, Dallas County District Attorney John Creuzot announces a Dallas County Grand Jury has returned indictments on multiple police officers charged in connection to the Summer 2020 Protests in Downtown Dallas in the wake of the death of George Floyd,” the DA’s office said a statement.

Sr. Cpl. Melvin Williams and Sr. Cpl. Ryan Mabry, both SWAT officers with Dallas police, were initially charged in the case in February. But they were indicted along with Garland police officer Joe Priviit on Friday, WFAA reported.

Creuzot’s office presented the cases to the grand jury on May 4. At the end of his statement, he noted, “It is important to remember that all parties are entitled to the presumption of innocence.”

The Dallas officers faced a handful of charges stemming from protests ignited by the death of George Floyd in Minneapolis, according to the Dallas Observer.

Williams is charged with four counts of aggravated assault by a public servant and two charges of deadly conduct.

Privitt was indicted on one charge of aggravated assault by a public servant, the Dallas Observer reported.

Meanwhile, Williams was fired by the Dallas Police Department in late January after a video circulated showing him punch a man in the head several times while trying to break up a street fight in Deep Ellum last summer, according to the news outlet.

Mabry and Williams were previously charged in February with three counts of official oppression.

According to the news outlet, the Dallas officers find themselves indicted largely over their use of less lethal munitions.

Mabry is currently on administrative leave.

Garland Police Chief Jeff Bryan appeared to take issue with the indictment of his officer as he reminded attendees at the press conference late Friday afternoon that the case against Privitt is still working its way through court.

“Out of respect for the criminal justice system, I have a prepared statement, but I’m not going to be answering questions,” Bryan said, as he was accompanied by a group of officers who wanted to be present as he read the statement.

“I’m astonished and disappointed to learn that Officer Privitt of the Garland Police Department was indicted by a Dallas County grand jury this week related to actions he took in assisting the Dallas Police Department during riots that occurred in Dallas almost two years ago,” Bryan said.

“On May 30, 2020, officers of the Garland Police Department, including Officer Privitt, responded to downtown Dallas at the urgent request of the Dallas Police Department after earlier protests that afternoon had deteriorated to rioting during the later hours,” he noted.

Bryan authorized his officers to help DPD to help prevent the loss of life and property “threatened by the riots.” He highlighted that his officers were put into a “rapidly evolving, chaotic and dangerous situation.”

The supportive chief emphasized that protesters set fires, brandished firearms and threw objects at police. “In response, officers attempting to stop the rioting were often required to make split-second decisions under the most dangerous of circumstances to protect their lives, and the lives and property of the citizens of Dallas, often placing themselves in harm’s way while doing so,” Bryan declared.

In regards to Privitt, the chief said he is a highly decorated officer who’s been with the department for over three decades without any disciplinary marks. “I have not seen evidence against Officer Privitt that rises to the level of the criminal conduct that has been alleged by the grand jury,” he said. Privitt will be on placed on “administrative duties” until this is resolved.

Dallas Police Chief Eddie Garcia — who was not with the department in 2020 — addressed the indictments during a press conference Friday, the Dallas Observer reported.

“The negative light that has been shown on our department today is difficult for the brave men and women who protect our city day in and day out,” Garcia said. “The message to the community today should be: in light of these protests, riots and looting, that there were hundreds of officers that were professional and did their duty to defend this city.”

Garcia added: “If the actions of that day rose to criminal intent, that is for a jury to decide at this point. I hope those individuals who will judge those officers do so through a lens of what all of our officers experienced while protecting Dallas in one of the most chaotic times in its history.”