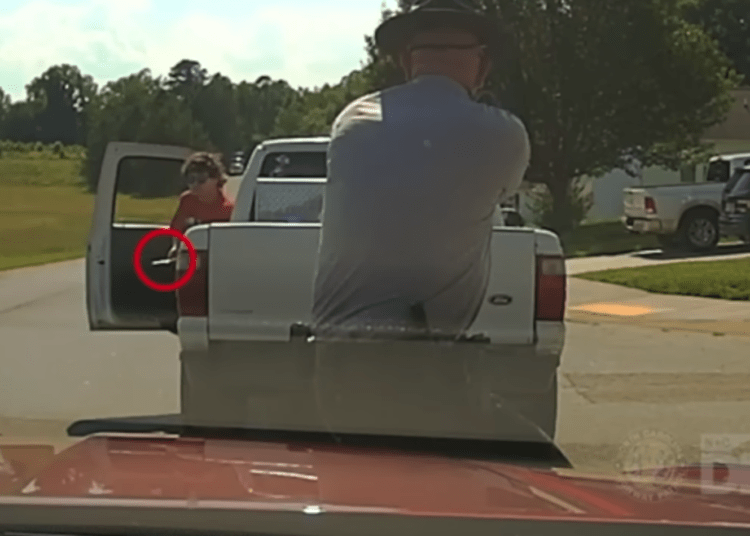 SILER CITY, N.C. — The North Carolina State Highway Patrol released dashcam video on Tuesday showing a fatal trooper-involved shooting of a suspect who emerged from his driver’s seat with a firearm in his hand during a May 30 traffic stop in Chatham County.

The traffic stop was for seat belt violations after the trooper saw that neither the driver nor passenger were buckled in, according to the Highway Patrol.

The driver was identified as Mark Anthony Diaz, 21, of Staley, North Carolina, according to the news outlet.

Trooper Cook is a 16-year veteran of the Highway Patrol. Dashcam video shows him conversing with Diaz while the driver is still seated in the truck.

Cook asks Diaz why he wasn’t wearing a seatbelt and follows up with a question about the odor of marijuana. Diaz is unable to produce a driver’s license upon request from the trooper, WRAL reported.

Finally, Cook asks Diaz to step out of the truck. As he begins to exit the vehicle, Diaz is armed with a handgun that can clearly be seen by the trooper, who then retreats to the back of the truck and toward his patrol unit. From that location, Cook fires at Diaz.

As Cook discharges his duty weapon, the video shows Diaz fall to the ground with the gun in hand. The truck subsequently rolls forward, stalling out and a passenger jumps from the vehicle and runs away.

WARNING: Video may be disturbing to some viewers.

After the trooper fires a single round, the video shows Diaz fall to the ground, injured, still holding the weapon. Cook can be heard asking the suspect repeatedly to drop the gun while radioing for help.

Cook cautiously approaches the downed suspect and removes the firearm from his hand. He calls for EMS and begins administering CPR, WRAL reported.

The trooper can be heard telling Diaz to “stay with me” as he performs chest compressions.

“Sorry, he pulled a gun on me,” Cook said as backup troopers and paramedics arrived eight minutes later.

Diaz’ brother Moises said he didn’t know his sibling owned a gun after the family was shown video of the lethal encounter.

“They were going to search his car,” said Moises Diaz, 25, in an interview with The News & Observer.

“I think he just got scared. If my brother did point the gun at (the trooper) with bad intentions, then at least they could have disarmed him, or tried their best to like, detain him, but then again, it was in the heat of the moment.”

The North Carolina State Bureau of Investigation is handling the case. Cook was placed on administrative duty, per normal agency protocol.