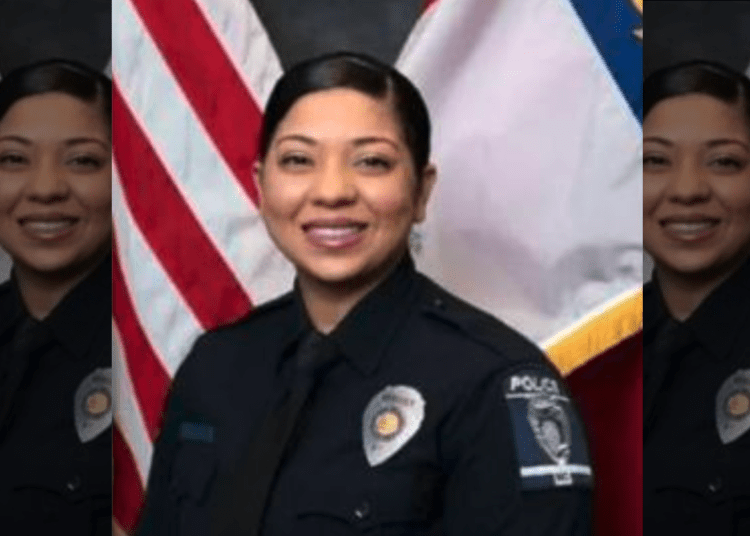 CHARLOTTE, N.C. — A police officer in North Carolina has died in a traffic fatality and three additional officers were injured. The Charlotte-Mecklenburg Police Department and loved ones of Officer Mia Goodwin are mourning her death days before Christmas.

Two tractor-trailers collided on Interstate 85 southbound near W.T. Harris Boulevard about 3:30 a.m. on Wednesday. As the rigs crashed they also plowed into a group patrol cars and officers who were at the location working a prior collision. Goodwin died at the scene, and three other CMPD officers were transported to the hospital, WRAL reported.

The additional officers were not identified and their injuries are not immediately known.

Goodwin was the mother of three young children, ages 3, 1 and 4 months. She had just returned from maternity leave days earlier, according to CMPD Chief Johnny Jennings.

Goodwin was hired in October 2015, and loved her work, Jennings said. She was also married to a Charlotte firefighter.

“We put on this uniform and we know that there’s no guarantees that we’re coming home to our families, and that is the most difficult,” Jennings said. “It’s one of these situations where we recognize that life is not guaranteed and life is short and we have to embrace it.”

Jennings said his department has already reviewed video of the collision many times. Hence, they are working to determine how to improve safety for police officers at crash sites, although it is difficult to overcome carelessness on the part of drivers passing the scene of a collision.

“The only way this doesn’t happen is if people recognize that there are blue lights in the roadway, slow down and take extra precaution,” he said, according to WRAL. “And when you don’t do that, you put the lives of men and women who are there to serve and protect in danger.”

One of the truck drivers was taken to a local hospital. An investigation is underway. It is too early to determine if charges will be appropriate, police said.

“The profession is not just for anyone, but she knew it was for her,” Jennings said, as he sought prayers for Goodwin’s family, the department and the entire city.