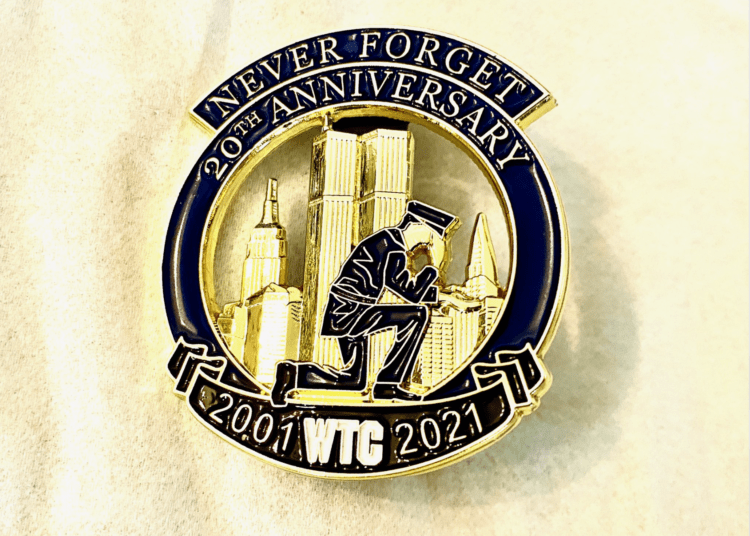 It’s taken me almost 20 years to write this story, so it’s about time I tell people what the events at the Twin Towers meant to me here in San Francisco.

And to my cousin Larry who was a New York City Port Authority police officer on that day of terrible loss.

On 9/10/2001, Larry traded shifts with a buddy of his so he could have the next day off. Both guys were assigned to the Emergency Services Unit, so the swap didn’t raise any eyebrows.

When Larry heard of the attack starting, knowing that Port Authority Trans Hudson (PATH) Headquarters was in a Twin Towers building, he ran to his facility’s location, grabbed his Airpack and emergency gear, and (according to what he later told me), “drove across the ******* Bridge at 150 miles an hour.”

The guy that took Larry’s shift with the ESU van died that day.

Almost 40 PATH officers died in the two-pronged attack, along with hundreds of NYC Firemen, and other heroes.

Larry tells me that PATH officers (off-duty, retired, and even one cop who was in the hospital with an IV in his arm and pulled it loose while running out the door) ran towards the sounds of Armageddon.

Being “subway cops” scores of PATH first responders used their knowledge to run through seldom used tunnels, and up hidden stairways, while wearing their disaster gear.

After days of working nearly non-stop at Ground Zero, Larry was confined to an ambulance with a blood pressure of 190 over 120. Medicated by an overwhelmed medical triage unit, he returned to work against their orders.

The people such as Larry used hands, shovels, crow bars and later power equipment in their attempts to rescue people. Un-fallen wreckage towered above them, threatening to collapse on these teams, groaning and wracking in the smoke-choked wind.

They got some people alive out of the wreckage, but not many and not nearly enough.

I was newly assigned to the San Francisco Police Department’s Crime Scene Investigation Unit.  With this posting, I rated an un-marked city car so I could get to major crime scenes quickly.

This technically was a “suit and tie” job, but it did help when I got to an incident that I was wearing my uniform, so on Nine-Eleven I was in my usual body armor with full gun belt.

I’m a self-admitted news junkie which occasionally helps with my job. I turned on the car radio as I was headed into my office and spun the channel selector to KCBS.

In an almost breathless monologue, the news radio talking head was nearly shouting at me about how airplanes were crashing into buildings in New York City, and how America was under an air attack!

My father was deeply involved in broadcast radio and later TV with WGN in Chicago (“The Voice of the Midwest!”) so, by the time I was in grade school I had heard the famous Orson Welles fake news broadcast of the Martian Invasion ala Herbert George Wells many times over.

This was in my head as I hit up every pre-programmed news station in the Bay Area. They ALL had versions of the first story that I heard, so I called into the SFPD Operations Center to check out what I was going on.

I’ve worked in the OPS Center before, and it’s always been a sleepy assignment, until all hell breaks loose. I called in on the non-public number, and was pleased to hear a friendly, calm, and familiar voice. The background noise behind Paul was anything but calm and friendly.

Semi-organized chaos would be a kind assessment.

“SFPD Operations Center, Sgt Paul S here, how may I help you?”

“Oh, Hello Lieutenant, have you called in to reserve your seat on the West Coast version of the Titanic here?”

(Thank God I could still smile.)

(Business voice as in reading from a prepared script) “Several large commercial airliners have apparently been deliberately flown into the Twin Towers in New York City. A massive loss of life is being projected.

“Yes Sir, and between 5 and 10 other large planes are unaccounted for by the FAA and the military at this very moment.”

“We are being told that numerous iconic civilian structures across the country may be targets of this apparently organized attack, including locations in San Francisco.”

“Lieutenant O., Commander. He’s calling in to see what he can do to help.”

(Thanks, a whole bunch Paul)

“Lieutenant O.?  This is Commander B. Where are you and what are you doing right now?”

“Commander: I’m west bound on the Bay Bridge, almost to the Harrison Street off-ramp, in a company car, and in full uniform. How can I help?”

“Good man. Your Detail assignments are as follows:

“First, join a squad and assume command of it at the base of the Bank America Headquarters Building. Assist the fire department in evacuating that building.

“Second, transfer your command to the base of the TransAmerica Pyramid as soon as possible and evacuate that building as well.

“Report back conditions as you find them.”

“Yes sir, Commander, may I talk with Sgt Paul again?”

“Hey Boss, sorry about that” (chuckle).

“You owe me a shot and beer; What’s really going on?”

“They have evacuated Silly Hall, and we have F-16’s orbiting the Golden Gate Bridge with orders to interdict an airborne attack.”

“The Feds are worried about the Bridge, and not the City?”

“Paul, how many cops do I have at those locations?”

“Careful boss, this is a taped line remember?”

“Talk to you later, Sarge.”

As I got off the Bay Bridge, I noticed an odd traffic element. Almost ALL of the cars were headed east bound out of the city. CHP motor cops were having an unpleasant day directing the nervous and scared people out of what appeared to be harm’s way.

The emergency lights and siren gear on unmarked police cars are candidly a joke. You can actually move much faster by just ignoring the rules of the road and using the gas pedal or the brakes a LOT.

So, I did just that.

The Bank of America Tower at 555 California Street is 55 stories and 712 feet tall. Multiple thousands of people work there. When I pulled up in my beat-up Crown Vic, they all seemed to be pouring out of the building and onto the street level plaza like a raging river of three-piece suits and power ties.

SF Fire was already on the scene, and they had more people available on one of their three engines than I had assigned to me in total.

I did a brief huddle with a fire captain from the Alley Cat Station and his assistant chief, and then grabbed my people.

“Here it is guys: One of us goes with each team of firemen. We get to the top of the tower in a controlled elevator and then they send everyone that’s left downhill. Anyone we see anywhere on any of the floors gets moved out. It’s a total evac of the place. They do the ordering, and we back them up. If anyone gives them grief, tell me. I’ll ask the chief here what she wants done, and we will comply.

“We are on PIC Radio 12. The Command Post is on the trunk of my car. No questions? Get busy, go.”

Somebody much smarter than me had blocked off all vehicular traffic on California Street so that this wave of humanity could occupy all 6 lanes of traffic space.

It seemed like every skyscraper in the area was vomiting up panicked financial types, and they in turn were lemming-like headed down hill to the BART subway stations.

Fortunately for me that was a BART PD problem, not mine.

Everyone was watching the sky, looking for an out-of-place airplane.

If the B of A Tower was the most distinctive large target in the Financial District, (and it was), then the next most prominent piece of elevated engineering ego was the nearby pointy-headed Transamerica Pyramid building.

Slightly shorter than my first assignment at only 48 stories, it was visible for miles around because it looked like a Pharaoh’s steroid enhanced dream. White and gleaming, it was actually more visible than B of A’s humongous dull brown monolith.

When we had only a few floors left on California Street, I left the squad under the care of the senior officer there and scooted over to the Pyramid.

I love initiative, sort of.

While building security and my three hard working cops there had been evacuating tenants in an orderly fashion with the help of 20 or so fire people, one of the civilians had gotten creative, and pulled a fire alarm.

I never knew that fire sprinklers came on automatically in these buildings in certain exact circumstances. Just like now.

Wet fake marble floors and panicked people in high heels or slick soled loafers is not a good match.

By the time we got this wet mess under control, my PIC radio was blaring out an all clear for California Street, and (of course) Commander B wanted an update.

The sprained ankles, bruised ribs, ruined hairdos, and such here were not even a minuscule blip on the screen when it came to what the East Coast suffered through.

The armed and dangerous fighter jets overhead in San Francisco were thankfully recalled well before any of the smoke cleared in New York, over the Pentagon, or from a formally placid field.

My cousin Larry would labor on for many more hours before he could rest his head. His family could not reach him via a non-operational cell phone, and for a while he was missing in action, with the worst feared.

Larry made sergeant and retired. I retired some years later as well. One thing that neither of us will ever “retire” is what happened to the two cops with the same last name, separated by thousands of miles, on September Eleventh, Two Thousand One.

With thanks to both of our Families who stood by and supported us and our Country.