'This is just huge. I wish my grandfather were alive to see it,' said a descendant of the late lawman's brother 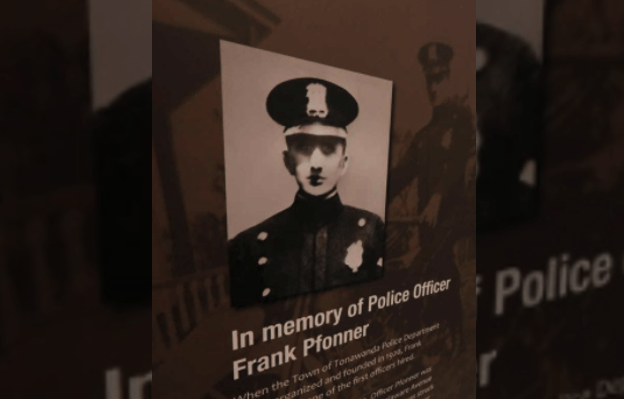 In memory of Frank Pfonner. (Town of Tonawanda Police Department)

TONAWANDA, N.Y. — It took nearly a century, but a New York town will now honor a police officer who died in the line of duty by renaming its police and court complex after the fallen lawman.

The Town of Tonawanda Police Department was established 101 years ago. Frank Pfonner was one of three law officers initially hired to police the jurisdiction. He patrolled the town’s roads by motorcycle, primarily chasing down speeders, bootleggers and burglars. He once survived being shot in the face, Buffalo News reported.

The fatal day for Pfonner occurred on April 8, 1923, as he rode on Delaware Avenue. He was fatally injured when a speeding car smashed into him. The driver raced off without stopping and was never found. Many speculated the culprit was tied to bootleggers, but nothing was ever discovered.

Pfonner, 29, died hours later at a Buffalo hospital. He was engaged to be married at the time of his death.

Until recently, there was little in the town acknowledging Pfonner, according to the news outlet. Nevertheless, that is changing.

The town decided to rename its recently renovated police and court complex in the late lawman’s memory. On Tuesday, the town held a dedication ceremony at the facility now known as the Frank H. Pfonner Public Safety Building in honor of it’s only officer killed in the line of duty, according to Buffalo News.

“It took 98-plus years to get here, but from this day forward people are going to know who Frank Pfonner was and what he gave up,” Supervisor Joseph Emminger said at Tuesday’s ceremony.

One article from the Buffalo Evening News in August 1922 described Pfonner on his motorcycle engaged in a “mad dash” to try to catch a speeder, who wrecked his vehicle in Kenmore. Pfonner put the “bruised and bleeding” driver in his sidecar and took him away for processing.

In June 1921, he and a fellow motorcycle officer engaged in the chase of a stolen automobile along River Road before the thieves bailed from the car and escaped through a nearby marsh.

Another harrowing experience occurred on July 7, 1920, when he was shot in the chin by one of two men suspected of burglarizing a clothing store. Undaunted by the encounter, Pfonner was back on patrol within two weeks.

The evening of Pfonner’s fatal collision, he was riding his motorcycle, with a fellow officer in the sidecar, on Delaware Avenue at Princeton Boulevard. About 8:30 p.m., a southbound Packard touring car, traveling about 60 mph and occupied by two men and two women, smashed into the officers. The car didn’t slow down and no one got its license plate, Buffalo News reported.

Pfonner was thrown from the motorcycle into the roadway and knocked unconscious. He sustained a broken leg, broken collarbone as well as internal injuries. He passed away that evening at the Buffalo Homeopathic Hospital, later Millard Fillmore Gates Circle Hospital. His partner was severely injured but survived.

Although a $500 reward was offered, police never made an arrest in the case.

“The family believes bootleggers intentionally ran him down,” Stauffiger said.

One of the few existing photos of Patrolman Frank H. Pfonner. (Town of Tonawanda Police Department)

Pfonner was buried in the family plot in the cemetery at St. Peter’s German Evangelical Church, which now hosts the town’s history museum.

In 2015, Stauffiger decided the town should do more to honor Pfonner, who has descendants, mainly his siblings’ grandchildren and great-grandchildren, still living there.

“The department, the town, never did anything big for Frank,” Stauffiger said.

Tonawanda now employs about 100 police officers. They began wearing mourning bands across their badges each April 8. And, at the suggestion of Assistant Police Chief Joseph Fennell, the town this year on the anniversary of Pfonner’s death laid a wreath at his grave, according to Buffalo News.

It was at that time that police and city leaders came up with the idea of renaming the police and court building after the late lawman.

Renaming of the facility will permanently memorialize Pfonner’s service.

At Tuesday morning’s dedication, Emminger said the new name is meant to honor Pfonner’s sacrifice as well as the public service performed by today’s officers.

“This is just huge. I wish my grandfather were alive to see it,” said Frank Pfonner Jr., a great-grandson of the officer’s brother, Elmer. “I think it’s awesome that they honored the man. I sincerely hope they never have to do it again.”