Deceased deputy's sister: 'He's like the Devil, I don't understand it' 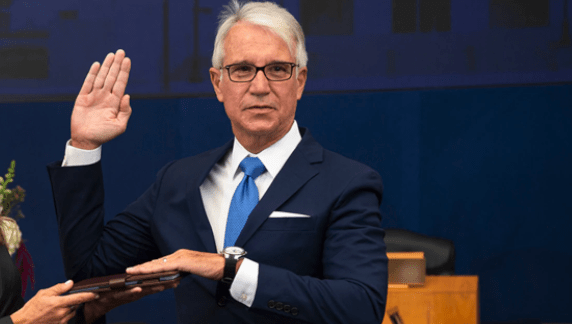 LOS ANGELES — The new district attorney in Los Angeles wants to drop special circumstance allegations against a man charged last year with shooting an off-duty law enforcement officer in the head, according to a report.

“Completely in shock, I can’t even tell you, my heart just dropped, I couldn’t believe it,” Christina Solano told the station. “He should be there for the families, we are the victims here, not this person who shot him. I don’t understand what his purpose is to let these murderers out of jail, I don’t get it, he’s like the Devil, I don’t understand it.”

Rhett Nelson, 31, of Utah, was accused of walking up to Deputy Solano at a Jack in the Box fast-food restaurant in Alhambra in June 2019 and shooting him in the back of the head. The 50-year-old Solano died two days later.

After his arrest, Nelson was charged with two counts each of murder and second-degree robbery as well as one count of attempted murder.

His case also included special circumstance allegations of multiple murders and murder by means of discharging a firearm from a motor vehicle as well as allegations of using a handgun during the commission of the crimes.

NEW: Under new D.A. George Gascon’s reforms, I’ve confirmed his office is trying to dismiss all enhancements & special circumstances against the alleged double murderer/cop killer accused of shooting LASD deputy Gilbert Solano in the back of his head. His sister is irate. @FOXLA pic.twitter.com/SxnPiOuRPG

As a result of the special circumstance charges, Nelson faces a maximum prison sentence of life in prison without the possibility of parole, Fox 11 reported.

Without the enhancements, Nelson faces a sentence of at least 40 years and would be eligible for parole, according to the station.

Gascon, a former San Francisco DA, was sworn in as the top prosecutor in Los Angeles last week. Quickly after assuming office, he vowed to reform the criminal justice system by eliminating the death penalty, doing away with cash bail in many cases, and refusing to impose special circumstance allegations as sentencing enhancements.

“As homicides, shooting victims and shots fired into occupied homes soar in Los Angeles, it’s disturbing that Gascon’s first act in office is to explore every avenue possible to release from jail those responsible for this bloodshed,” the union’s board of directors said in a statement last week. “These victims and law-abiding residents lost a voice today while criminals and gang members gained an ally in the prosecutor’s office.”

A representative from Gascon’s transition issued a statement to Fox 11 that said the prison sentence Nelson would face is 40 years to life.

“If convicted, there is a possibility that decades from now, the parole board could determine he’s been rehabilitated,” the statement said. “Such a determination, many years from now, would ultimately be a reflection of a system and the public alike weighing their continued interest in incarcerating a man who no longer poses a threat to society at an extraordinary taxpayer cost. Eliminating that remote possibility today may not be in the public’s interest decades from now.”