Critically wounded officer has a bullet lodged in his skull 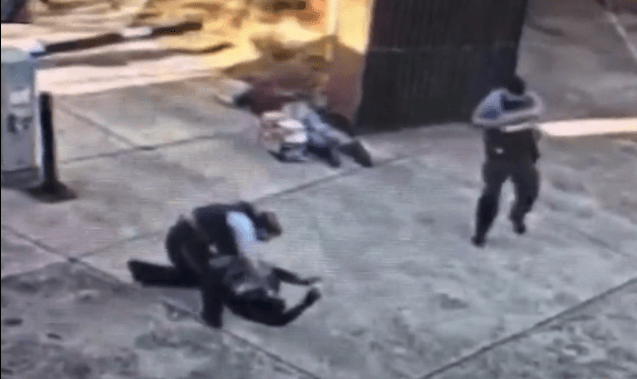 A suspect is taken into custody after ambushing NOPD officers. (Screenshhot WWL-TV)

NEW ORLEANS — An officer of the New Orleans Police Department was ambushed and shot in the face while sitting in his patrol unit in the French Quarter.

A man in a pedicab opened fire on NOPD officers at the intersection of Royal and St. Phillips Friday, shooting one officer in the head, WWL-TV reported.

According to NOPD Chief Shaun Ferguson, the critically wounded officer has a bullet lodged in his skull below his left eye. The second officer has minor lacerations on his arm.

According to Ferguson, the officer who was shot is a 4-year NOPD veteran. He is in “serious, but stable” condition.

NOPD officers responding to the scene were able to chase down and apprehend the suspect, who was taken to the hospital by EMS.

Watch video of the ambush here:

According to Ferguson, NOPD officers were able to apprehend the suspect without firing their weapons. The suspect was not harmed during his arrest, but is at the hospital because police believe there is something medically wrong with him, according to WWL-TV.

Watch video of the arrest here:

“He did not appear to be normal at the time,” Ferguson said. “So we had him taken to the hospital to be checked out.”

Listen to a witness describe what happened during the “ambush” of two NOPD officers:

Ferguson thanked witnesses at the scene for helping police located the suspect and a retired Army veteran who gave medical care to the wounded NOPD officers before backup arrived.

“I wouldn’t expect anything else. The NOPD has always had the support of our citizens and our community,” Ferguson said. “I’d like the thank them for what they did.”

Neither the officers involved nor the suspect have been identified Friday night. Ferguson said the suspect refused to tell officers any information about himself.