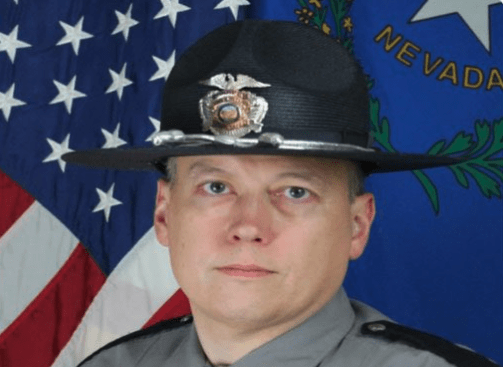 LAS VEGAS  — A trooper with the Nevada Highway Patrol was struck by a carjacking suspect, who was shot and killed by law enforcement after a pursuit on Interstate 15 in Las Vegas on Tuesday.

The trooper was identified as Micah May. He was struck by the suspect vehicle while deploying stop sticks during a pursuit on I-15 near Sahara Avenue, according to NHP.

“I worked with him several years when we were both working the overnight shift,” Trooper Travis Smaka said. “And it’s hard to really concentrate on anything else. We’re just hoping, hoping that he recovers.”

May was airlifted to UMC, and he remains in critical condition as of Wednesday morning, KSNV reported.

Officers shot and killed the suspect after a PIT maneuver terminated the pursuit. The suspect has not yet been identified. The officer-involved shooting is being investigated by the Las Vegas Metropolitan Police Department.

Please help us support Trooper May and his family by donating at https://t.co/gG9CN26G2O. Keep the thoughts and prayers coming as well pic.twitter.com/fjhyDBoOJh

May, 46, has been with the Nevada Department of Public Safety since April 2008, according to NHP. He is married and a father of two.

The Injured Police Officers Fund has established an account to help his family. Donations can be made online at IPOF.vegas or mailed to:

Video captured from a bystander showed NHP cruisers performing the PIT maneuver to stop the carjacking suspect who critically injured May, KSNV reported.