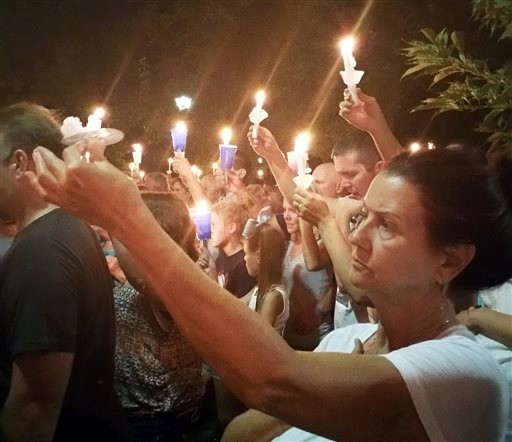 CARSON CITY, Nev. (AP) — Hundreds of people crowded a plaza at the Nevada Capitol grounds for a candlelight vigil honoring a Carson City sheriff's deputy who died earlier that day after a domestic violence call ended in a shootout.

The Reno Police Department, which has taken over the investigation, identified the deputy as Carl Howell, a nine-year veteran of the sheriff's department who is survived by his wife and four young children. The suspect in the confrontation died on the scene.

"Carl was your poster child of a police officer. Absolutely," Carson City Sheriff Ken Furlong said after the vigil, which was held Saturday night in front of the Nevada Law Enforcement Memorial monument next to the Capitol building. "He's the kind of officer that would take a child by the hand and walk him across the street. He's the kind of officer that would stand out in front to protect your life regardless of the threats to him."

Authorities said Howell had gone to a home in east Carson City early Saturday after a report of domestic battery. He found a woman with injuries that apparently came from a fight. Howell approached the home to try contacting the suspect.

Officials said Howell encountered 30-year-old Jonathon Pope, who appeared to be armed. The two exchanged gunfire, and both were fatally struck.

Pope died at the scene, while authorities say Howell succumbed to his injuries at Carson Tahoe hospital. Three children, ages 8 to 13, were evacuated from the home.

"Why this went so wrong, so fast — we don't know yet," Furlong said.

Howell's was the department's first on-duty officer death in more than 50 years, and the response was swift in the sleepy state capital of about 55,000 people.

By the end of the day Saturday, more than a dozen flower arrangements could be seen in the lobby of the Carson City Sheriff's Office, and others were placed at the marble monument on Capitol grounds.

About 60 police and fire vehicles formed a procession that arrived at the vigil with lights flashing and sirens wailing. Sobbing could be heard during the ceremony, which included a uniformed honor guard and a bagpiper playing "Amazing Grace."

"When you see something like this, the emotions are just absolutely overwhelming," Furlong said. "Our officers, our paramedics, our firemen, our dispatchers — they truly commit everything they have for this town, and this is what the town gives back."

Share and speak up for justice, law & order...
Tags: General NewsNewsOfficer Down